Once again, ACC is top-ranked Clemson ... and everyone else 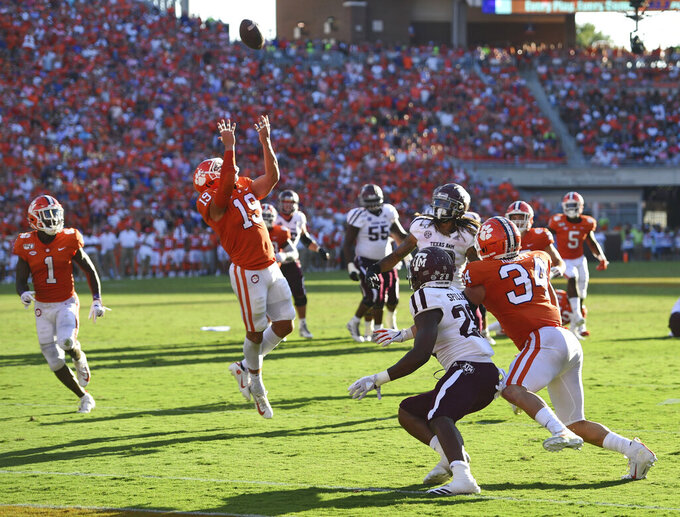 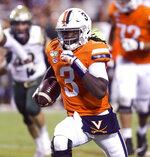 BOSTON (AP) — Syracuse coach Dino Babers has to look outside the Atlantic Coast Conference to find a comparison for the Clemson team that ran the table last year and blew out Alabama in the national championship game.

"I look at that team and I think about the Miami Dolphins going undefeated in the National Football League " in 1972, Babers said this week as the Orange prepared to face the top-ranked Tigers on Saturday night.

"We've had college football teams going undefeated before. To me that's a heck of an accomplishment. Now we're on their second run with an opportunity to do it again," Babers said. "We're probably seeing one of the best teams of an era."

There doesn't appear to be anyone in the Atlantic Coast Conference that can challenge No. 1 Clemson (2-0, 1-0 ACC).

Syracuse was the top contender entering the year, coming off a 10-win season that earned it a No. 22 ranking in The Associated Press preseason Top 25. It was also the last ACC team to beat the Tigers — in 2017, in the Carrier Dome.

But after losing 63-20 to Maryland, the Orange (1-1, 0-0) don't look ready to take on the defending national champions this Saturday.

"We all know Clemson is an elite team. That's not the great mystery," Boston College coach Steve Addazio said. "But where everybody is, who knows? We're going into Week 3. There's a lot of football left to be played and a lot of team cultures yet to be developed."

Syracuse was bounced from the Top 25 after Saturday's blowout in Maryland, leaving No. 25 Virginia as the only other ACC team in the rankings. The Southeastern Conference has three of the top four spots, half of the top 10 and six in all; the Big Ten has seven and the Pac 12, which has been left out of the College Football Playoff in three of its five years in existence, has 5 ranked teams.

Clemson has no currently ranked teams left on its schedule; North Carolina, which received poll votes this week along with Boston College and Syracuse, hosts the Tigers on Sept. 28.

Virginia is not on Clemson's schedule — it hasn't played the Tigers since 2013 — but if the Cavaliers can win the Coastal Division the teams could meet in the ACC title game. The Cavaliers are the only Coastal team not to win the division in the past six years.

Like many of his ACC coaching brethren, Addazio said it's too early in the season to start judging where the teams will finish. Turnovers or sloppy penalties can skew early season results and don't necessarily indicate how a team will be playing at the end of the season.

"Right now, a lot of things are up and down," he said. "Teams have a mechanism of battling back. I think you get into week 6, and you're going to start getting a good read on what's going on within our conference — or any conference, probably."

Clemson quarterback Trevor Lawrence said coach Dabo Swinney reminds the team that every team is aiming to end the winning streak, which now stands at 17 straight, and 12 in a row in the conference.

"He's right when he says, 'We're Clemson. We're going to get everyone's best," Lawrence said. "That's one thing that keeps you grounded because you know you're getting their best."