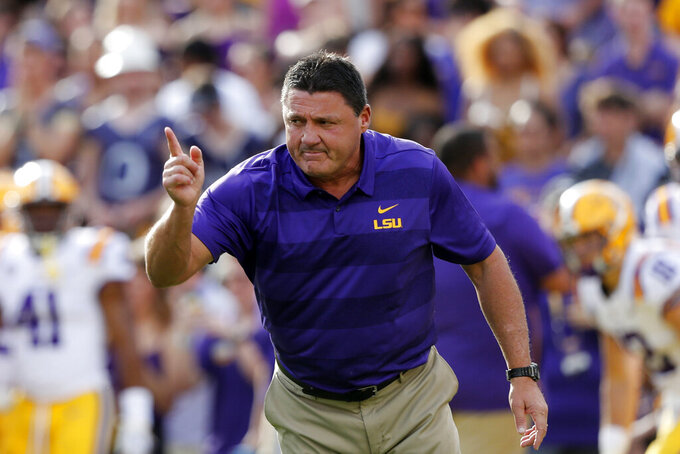 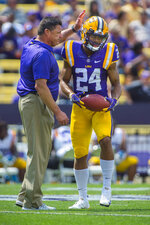 BATON ROUGE, La. (AP) — LSU coach Ed Orgeron makes it clear the sixth-ranked Tigers are too busy preparing for Georgia Southern's triple option to talk about their highly anticipated showdown with No. 10 Texas a week later.

"It's our first game and we want to do well. And all of a sudden a triple-option team comes in and all of your time is spent on worrying about how we're going to defend it," Orgeron said Monday of the visiting Eagles, who were 10-3 last season.

The Texas game, "has not been mentioned," Orgeron said. "We haven't had any distractions."

LSU appears to have avoided significant injuries and off-the-field troubles that afflict some college teams this time of year.

While freshman guard Kardell Thomas, who was expected to compete for first-team snaps, had an ankle injury which required surgery, he is the only player who has publicly declared out for the season.

And, unlike last year when two scholarship quarterbacks transferred during preseason camp, having an established starter in senior Joe Burrow has eliminated that drama.

Beyond good fortune, Orgeron said, the lack of injury concerns stem from NFL-level caution in resting players who have what he called "minor camp injuries," thereby avoiding risk of aggravation.

"Our practices have a lot of walk-throughs, although there are times when we are hitting," Orgeron said. "Our training staff does a tremendous job of gauging everything about how hard we should be working.

"You've always have guys who want to play. But when they're held out, they kind of understand."

The relative lack of pre-season disciplinary problems this far was another point of pride for Orgeron.

"I do believe the culture of this program has changed," Orgeron said. "We recruit character.

"We tell our team that character counts. Do the right things, protect the team and so far it's been pretty good."

On the field, the depth chart released Monday showed only one position — left guard — as a game-time decision. That call is between fifth-year senior Adrian Magee and sophomore Chasen Hines.

As expected, cornerback Derek Stingley, considered the nation's No. 1 recruit from last season, will be starting, making him and kicker Cade York the only first-year players to do so.

"John Emory is everything and more," Orgeron said of the nation's top-rated prospect at his position. "And Joseph Evans has proven he can play at LSU."

In Georgia Southern, the Tigers will be facing a team that was an FBS-leading plus-22 in turnover margin last season, thanks mainly to the Eagles becoming the first team in NCAA history to go through the season without throwing an interception (Georgia Southern averaged just nine attempts per game).

"That's a phenomenal stat," Orgeron said. "We had a bonus week last week (due to classes not starting until Monday) and thank God we did because we needed the time.

"You've got to guard the dive, the quarterback and the pitch. You've got to make a lot of one-on-one tackles. If you don't, they're going to make a big play."

But Orgeron emphasized that this game — not Texas — has the Tigers' attention.

"I've seen how hard our staff works and I've seen our guys coming together," he said. "In the first game there are always some questions in your mind — game management, making sure everything is clean.

"I just want 11 guys on the field fighting like Tigers and rarin' to go," the coach added. "I'm sure of that."