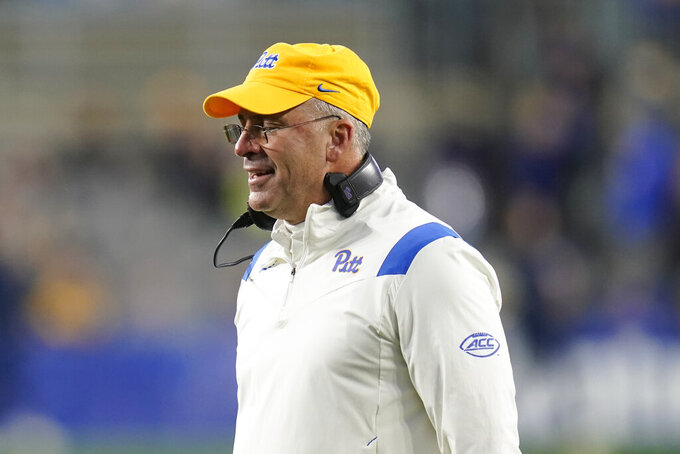 FILE - Pittsburgh head coach Pat Narduzzi on the sideline during an NCAA college football game against Virginia, Saturday, Nov. 20, 2021, in Pittsburgh. For the first time since the College Football Playoff was introduced in 2014, the ACC will not be part of the four-team elimination format. (AP Photo/Keith Srakocic)

Pat Narduzzi needed a little less time to do it at Pittsburgh, though the Panthers seemed poised to take another big step in Year 7 of his tenure.

The teams meet Saturday night in a Top 25 showdown for the ACC championship. It's a matchup Clawson sees as a validation for schools showing patience in giving coaches time to build programs. It also applies in each of the Saturday's other four power-conference title games, too.

“I think there’s some lessons to be taken there that if you feel you have the right person, and they’re doing things right, you’re always better off giving them that extra year,” Clawson said. “And obviously, that’s a little self-serving. I mean, I’m not in that position anymore, I've been here eight years.

“But if they’re doing something right and you believe in them, I think you stick with them. And more often than not, I think that usually will pay off.”

In all, eight of the 10 men coaching teams in the ACC, Big 12, Big Ten, Southeastern and Pac-12 conference championship games have been at their schools for at least six years, with fourth-year Oregon coach Mario Cristobal (Pac-12) and second-year Baylor coach Dave Aranda (Big 12) as outliers.

The ACC game pairs the league's coach of the year in Clawson with the No. 18 Demon Deacons (10-2, 7-1) against his runner-up in Narduzzi, who has the 17th-ranked Panthers (10-2, 7-1) in their second title game in four years. Beyond them, No. 21 North Carolina State and No. 22 Clemson won nine games for the league's next-highest win totals with coaches in their ninth year (Dave Doeren) and 14th (Dabo Swinney), respectively.

“If you look at where the league standings are this year,” Clawson said, “I don’t think that’s a coincidence.”

Neither Clawson nor Narduzzi won big in early years and have remained instead of jumping to other jobs as is an annual tradition in the sport. The reward comes Saturday night, either with Wake Forest claiming its first league title since 2006 or Pitt getting its first since joining the ACC in 2013 during a matchup of high-powered offenses led by star quarterbacks.

“You know, people don’t have much patience nowadays,” Narduzzi said. “My wife would probably say I don’t either, so I’m glad I’m not an AD. But yeah, I think there’s something to” staying patient.

The value of patience stands out with the Demon Deacons, in particular, in reaching this point for the first time since the '06 title. The private university has the smallest undergraduate enrollment (5,441) of any power-conference program, and the football program isn’t built on loading and reloading with five-star recruits.

Rather, the Demon Deacons win with long-term development of older players who have gotten stronger and honed their skills over time, typically beginning with a redshirt year. The goal is to play disciplined football with clean execution and avoid self-defeating mistakes such as penalties.

That development plan worked under Jim Grobe when the Demon Deacons last won the ACC crown. Clawson adopted elements of that approach in bringing Wake Forest to prominence again. Wake Forest went 3-9 in his first two seasons, but now is headed to a sixth straight bowl game with Sam Hartman at the helm of a tempo-controlling offense.

Last week, the school announced a long-term contract extension for Clawson on the eve of the division-clinching win at Boston College. And Wake Forest has had just one change to Clawson’s staff going back to the 2019 season.

“It’s rare to see a coach who shows up and builds something and truly cares about the players and wants to see that last,” Wake Forest offensive lineman Michael Jurgens said, adding: “So it’s great to see success come but I don’t think we’re satisfied yet.”

Narduzzi has already had a big moment when the Panthers survived the typical “Coastal Chaos” of their always-unpredictable division by reaching the title game in 2018. The Panthers won eight games the next year and now have jumped to their first 10-win season since 2009 behind NFL QB prospect and ACC player of the year Kenny Pickett along with a defense ranking second nationally with 46 sacks.

Narduzzi's first team to reach the title game lost a blowout to eventual national champion Clemson, though Narduzzi on Thursday tweeted a photo of a message written on a locker-room whiteboard from that night promising the Panthers would return.

The Panthers and Demon Deacons are exactly that.