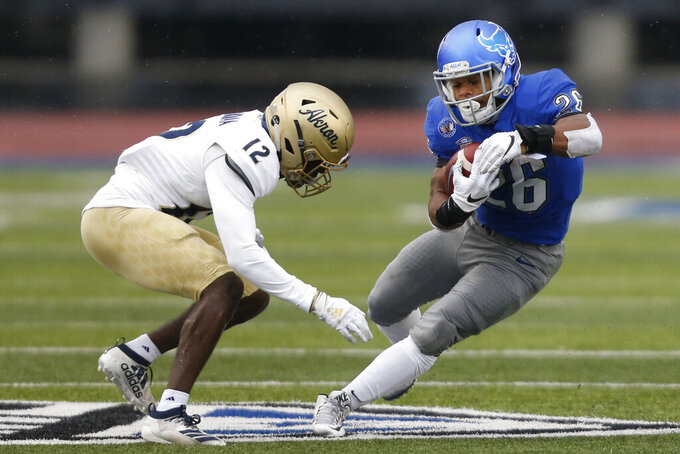 Buffalo running back Jaret Patterson (26) is tackled by Akron's Charles Amankwaa (12) during the first half of an NCAA college football game at UB stadium in Amherst, N.Y., Saturday Dec. 12, 2020. (AP Photo/Jeffrey T. Barnes)

AMHERST, N.Y. (AP) — Jaret Patterson ran for 105 yards and matched a major college football record by reaching 1,000 yards for the season in five games as No. 24 Buffalo routed Akron 56-7 on Saturday as a tune-up for the Mid-American Conference championship.

Patterson scored two touchdowns before halftime, bringing his season totals to 1,025 yards and 18 rushing TDs for the Bulls (5-0). He is the 12th player in FBS history to surpass 1,000 yards in as many games.

“We knew we had to dominate from the first play to the last whistle,” Patterson said.

“It really shows what type of team we are,” Patterson said. “How we handle success, not playing down to our opponent.”

Buffalo coach Lance Leipold challenged his team after an idle week during which the Bulls entered the national rankings for the first time and were declared MAC East division champions.

The Bulls scored on defense for the fourth time this season when Tyrone Hill blocked a field goal and returned it 63 yards for a touchdown in the first quarter.

Buffalo’s passing attack found the end zone for the first time in three games when Kyle Vantrease connected with Trevor Wilson for a 52-yard touchdown early in the third quarter. The Bulls ran for 21 straight touchdowns prior to that.

Jonzell Norrils scored on an 11-yard run in the fourth quarter for Akron. Buffalo had shutout Akron for nine straight quarters going back to 2018.

Akron: The Zips broke their 21-game losing streak last week, but still have a long way to go.

Buffalo: The Bulls are 5-0 for the first time since 1980 when Buffalo was a Division III program. Having won the MAC East division, the Bulls move on to the conference championship game for the second time in three years and the third time in school history.

Buffalo entered the AP Top 25 for the first time last week and could merit consideration for a higher ranking after another blowout victory on national television. The Bulls beat each five of their conference opponents by at least 19 points and lead the country in scoring (51.8 points per game).

The Buffalo tailback continued his record-setting run after he tied an FBS mark with eight rushing touchdowns in the Bulls’ 70-41 victory against Kent State two weeks ago. Patterson’s 409 yards rushing in that game were the second-highest total in major-college football history. Patterson’s 710 yards rushing and 12 touchdowns over his previous two games also set an FBS record.

Named this week as one of 10 semifinalists for the Doak Walker Award, Patterson leads the country in rushing yards per game (205) and yards per carry (8.3).

Marks wore the No. 41 jersey instead of his usual 5, an honor in the program. The number was worn by Solomon Jackson, a defensive end who died of a heart-related issue in March 2016 after collapsing during an offseason workout.

Patterson said wearing the number gave him “superpowers” on the day he ran for 409 yards.

The tribute took on greater meaning for Marks when he learned before Saturday’s game that his high school teammate Keyontae Johnson collapsed during Florida’s basketball game at Florida State.

“I almost broke down crying right before the game in the team meeting,” Marks said. “I was nervous knowing I ha to put this jersey on today. I knew I had to go out there and give my all. Because you never know.”

Akron’s season is over. The Zips have lost 12 consecutive road games.

Buffalo: The Bulls meet Ball State for the MAC championship on Friday at Ford Field in Detroit. It will be a rematch of the 2008 title game that Buffalo won for its lone conference championship.