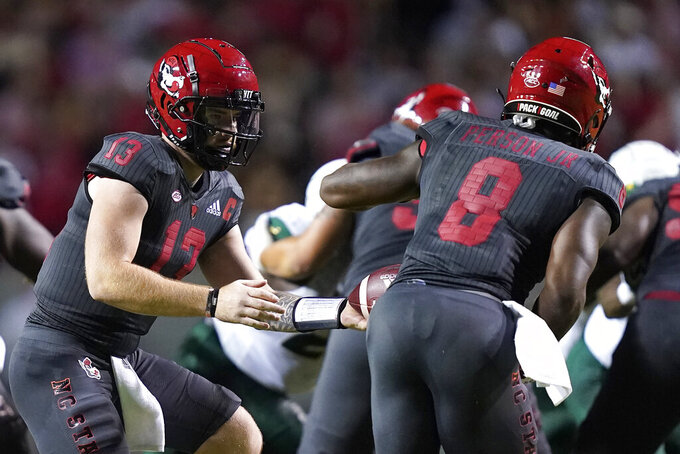 RALEIGH, N.C. (AP) — Ricky Person Jr. scored three first-half touchdowns and was one of two North Carolina State players to run for more than 100 yards in the Wolfpack's 45-0 season-opening win against South Florida.

It marked the Wolfpack's first season-opening shutout victory in 17 years.

Fellow back Zonovan Knight ran for 163 yards and a 46-yard touchdown, part of a 293-yard rushing day in a dominating performance by N.C. State to start coach Dave Doeren's ninth season in Raleigh.

“I just asked them to be mature, and they showed that to me," Doeren said, adding: “They really took things to heart that we pointed out in the offseason that we needed to improve on.”

Person had a 33-yard TD catch from Devin Leary on a perfectly executed wheel route on the Wolfpack’s first drive, then scored a pair of 11-yard runs in the second quarter for a 24-0 halftime lead.

It marked the second straight year that Person opened the season with a multi-TD game, and he went on to finish with 105 of his 148 total yards on the ground.

The Wolfpack also had a solid return from Leary, who was playing for the first time since going down with a broken leg last October. Leary completed 17 of 26 passes for 232 yards and two scores, with his main mistake being an underthrown ball for an interception that could've been a touchdown.

N.C. State had little else go wrong, from the offense rolling right along to the defense making everything difficult for USF and picking off three passes.

That had second-year coach Jeff Scott pulling starter Cade Fortin — a transfer from Wolfpack rival North Carolina — for Timmy McClain before halftime in search of a spark. It didn't work, with McClain throwing a pair of deep-in-Wolfpack-territory interceptions before Fortin returned early in the third quarter.

By the end, USF had managed most of its 271 yards after the outcome was long decided.

“It just never really felt like we could get in rhythm,” Scott said. “That was disappointing because I felt like we were going to play a lot better than that.”

USF: Simply put, this was an awful start to Scott's second season with the Bulls. USF struggled for stops and chain-moving plays all night, with the only drama becoming whether the Bulls would ultimately scratch the scoreboard.

Scott called it “100% unacceptable, and every coach and every player has to own it.”

N.C. State: The Wolfpack looked ready from the start with a team featuring 18 returning offensive and defensive starters. Person and Knight both had chunk-play gains, while Leary had multiple sharp throws in his first action in 10 months. The offense finished with 525 total yards while the defense earned its first season-opening shutout since beating Richmond 42-0 in 2004.

“I think we had a good start tonight just showing and proving who we are,” said linebacker Drake Thomas, who had eight tackles and an interception.

Fortin's last college start came in November 2018 for UNC against N.C. State. He threw for 276 yards and accounted for two touchdowns in that overtime loss. But he was missing or throwing behind open receivers early and never looked comfortable for the Bulls, finishing with 41 yards on 7-for-20 passing with a fourth-quarter interception.

The big games from Person and Knight marked the first time N.C. State had two 100-yard rushers in the same game since beating South Alabama in 2015. Shadrach Thornton (111 yards) and Matt Dayes (104) combined for five rushing touchdowns in that 63-13 road win.

USF: Things won't get any easier. No. 13 Florida from the Southeastern Conference visits USF on Sept. 11.

N.C. State: The Wolfpack will face an SEC opponent on the road, visiting Mississippi State on Sept. 11.