Pig out: Ground-heavy Gophers try to regain Floyd from Hawks 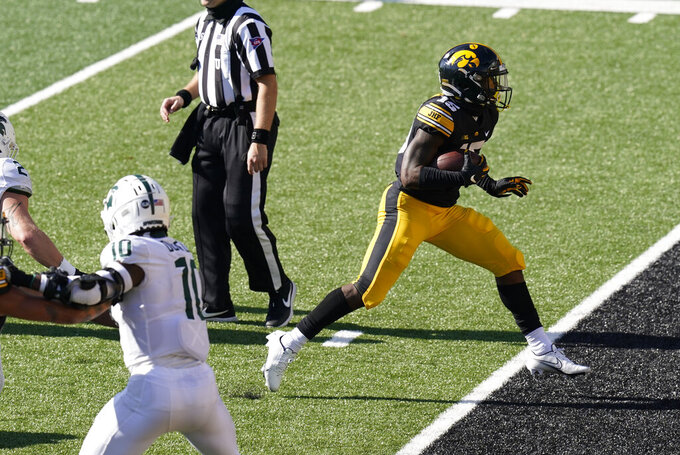 Iowa running back Tyler Goodson (15) scores on a 9-yard touchdown run during the first half of an NCAA college football game against Michigan State, Saturday, Nov. 7, 2020, in Iowa City, Iowa. (AP Photo/Charlie Neibergall)

MINNEAPOLIS (AP) — With practices limited and the offseason extended by the virus outbreak, Mohamed Ibrahim and the rest of the Minnesota offense settled in for some extra screen time.

Ibrahim has been seeing the field as clearly as ever this fall. The junior tailback leads the nation with an average of 190 rushing yards per contest, with 10 touchdowns in just three games.

“Since March we’ve been watching film and getting on the same page as the o-line, so some plays out there you can actually see me just be patient with an extra second,” Ibrahim said. “Last year, I would’ve just put my head down and got 3 yards, but now I’m just waiting, setting blocks up, understanding that the o-line’s going to get there and not get too fast off my reads.”

Ibrahim, who rushed for 224 yards and four scores to lead the Gophers (1-2) past Illinois last week, has already logged 97 attempts this season. This isn't an imbalanced team, either. Tanner Morgan was the second team All-Big Ten quarterback last year, and wide receiver Rashod Bateman is widely projected as a first-round NFL draft pick. Wide receiver Chris Autman-Bell and tight end Ko Kieft each have touchdown catches so far.

With a smart, sturdy and seasoned offensive line and a confident, savvy and elusive ball carrier like Ibrahim to execute those outside zone running plays, though, new Gophers offensive coordinator Mike Sanford Jr. would be foolish not to keep riding the Ibrahim train on Friday night against Iowa. Even if the Hawkeyes lead the Big Ten in rushing defense with an average of 102 yards allowed.

“He’s very violent. We like to use that term very loosely with guys who aren’t afraid to lower their shoulders and run people over and get the first down,” Iowa defensive tackle Daviyon Nixon said. “He's not that big of a back, but he's very powerful and very fast.”

This should all sound familiar to the Hawkeyes and their followers. They've long built their success around a strong ground game. Tyler Goodson and Mekhi Sargent are again the lead runners this year, with left tackle Alaric Jackson and center Tyler Linderbaum anchoring the line. Iowa also notched its first win last week with a drubbing of Michigan State.

“It was in great fashion, a total team win,” said quarterback Spencer Petras, who took over in 2020 for three-year starter Nate Stanley. “It was exciting. Now we've just got to keep building on it.”

Here are some other key angles to follow for the 114th meeting between Minnesota and Iowa, the first battle for the 98-pound Floyd of Rosedale trophy that will be played without ticket sales to the general public due to pandemic restrictions:

Floyd of Rosedale, which was first awarded in 1935 through a friendly bet between the governors of the two states, has called Iowa home for the last five years. The pig was placed in the weight room this week for extra exposure and motivation.

“It’s a one-year rental, so it’s up for grabs again," said Iowa coach Kirk Ferentz, who is 15-6 in his career against Minnesota.

FRIENDS WITH THE FRONT

Ibrahim has forged an especially strong bond with his blockers, a connection can't help but carry over to the field.

“Mo is a special, special player. He shows love to the offensive line like I've never seen a person show love to a position group before,” right tackle Blaise Andries said. "Like, he'll come and hug us at 6 a.m. before a lift or something like that just to tell us good morning and ask us how we're doing. It's actually amazing. So we take a lot of pride in having Mo a part of this team and really as a part of the o-line. He can come in and sit in our meetings anytime."

Nixon, a 6-foot-3, 305-pound junior, leads the Big Ten with six tackles for loss. He has 21 total tackles, more than any other defensive lineman in the conference.

Defensive coordinator Joe Rossi has returned to the Gophers this week, after he had to stay home from Illinois in a 10-day quarantine for COVID-19. He only had mild symptoms. Keeping himself away from his family was the harder part.

“Because I’m like the tiger in the cage, where they are coming and knocking on the glass,” Rossi said. “But, yeah, it was fine.”

This pandemic-truncated season, played largely without fans, figured to be unpredictable. Believers in football’s transitive property, though, would have a hard time betting against the Hawkeyes in this game considering their 49-7 blowout of Michigan State. The Spartans beat Michigan 27-14 on Oct. 31, and the Wolverines beat the Gophers 49-24 in the opener on Oct. 24.