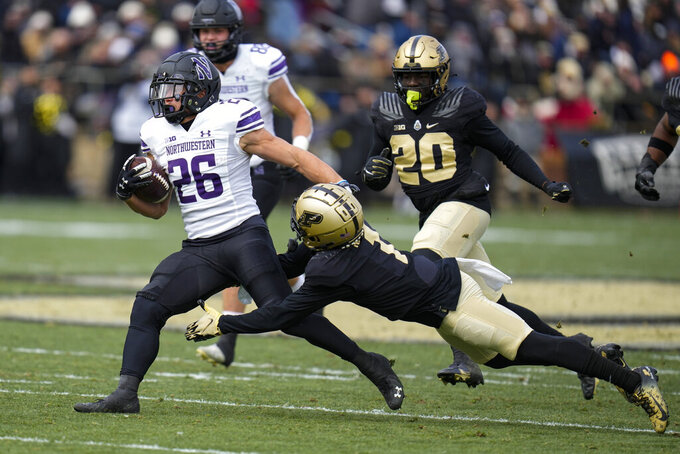 Northwestern running back Evan Hull (26) is tackled by Purdue defensive back Reese Taylor (1) during the first half of an NCAA college football game in West Lafayette, Ind., Saturday, Nov. 19, 2022. (AP Photo/Michael Conroy) 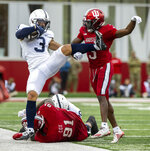 Adding an “I” or a “P” to the chain attached to the Old Oaken Bucket has provided motivation for virtually every player or coach associated with these programs since the trophy was first handed out in 1925. But this year's rivalry could include higher stakes. An Iowa loss to Nebraska on Friday means Purdue can clinch its first Big Ten West Division title and a date in the conference title game with a win. Strangely, the Boilers, who once took pride in being dubbed “Spoilers," find themselves facing a Hoosiers squad that hopes end this season by thriving in the same role while reclaiming a second straight trophy game victory.

Purdue WR Charlie Jones vs. Indiana CB Tiawan Mullen. Yes, it's unclear how often these two will meet one-on-one this weekend, but when they do it will be worth watching. Jones has been Aidan O'Connell's favorite target all season and has responded with All-American-caliber stats. Mullen has been one of the Big Ten's top cover cornerbacks for years and will pride himself by winning this matchup whenever it comes.

Purdue: DB Reese Taylor. Nobody understands this rivalry better than the Indianapolis native who spent four seasons on the other side. The former Hoosier has plenty to prove to his old coach and former teammates and the few guys with resumes like Taylor's typically make a big play or two in this game.

Indiana: Shaun Shivers, Josh Henderson and Dexter Williams II. Williams may throw more often than he did in four quarters and double overtime last week (seven attempts). Still, it's clear coach Tom Allen plan to finish this season by relying on the run. Shivers rushed for 115 yards and two TDs last week, Williams added 86 yards and another TD and Henderson has been solid all season.

Purdue coach Jeff Brohm is 3-1 against Indiana since taking the job before the 2017 season. ... Five of the last seven games in this series have been decided by seven or fewer points. ... Indiana snapped a seven-game losing streak with last week's victory at Michigan State. ... O'Connell has 63 career TD passes and is tied for No. 5 in school history with former NFL starter Kyle Orton. ... The last time Indiana captured both trophies in the same season was 2016. ... Allen is the seventh coach in Indiana history to register 30 career wins.