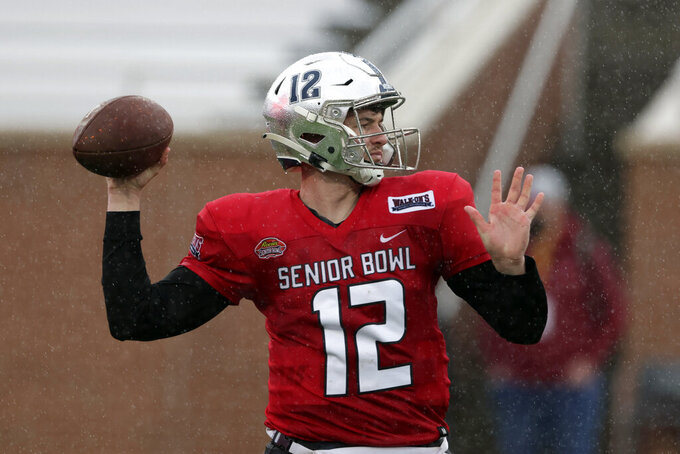 MOBILE, Ala. (AP) — The Senior Bowl quarterbacks are vying to be No. 1.

In an NFL draft where it seems unlikely for a passer to be the top overall pick, that means a competition among players like Pittsburgh’s Kenny Pickett, North Carolina’s Sam Howell and Liberty’s Malik Willis to be the first quarterback taken.

They’ll wrap up their weeklong audition for NFL teams with Saturday’s Senior Bowl game at Hancock Whitney Stadium. Mississippi’s Matt Corral is also a candidate for the No. 1 status, but he couldn’t participate in the game since he's a junior who hasn’t yet graduated.

“Iron sharpens iron,” Cincinnati quarterback Desmond Ridder said. “We’re all competing for our No. 1 spot. All competing to get to the best team.”

The National team will be led by Heisman Trophy finalist Pickett, Nevada’s Carson Strong and Ridder, who led the Bearcats to the College Football Playoffs and went 44-5 as a starter.

While there’s no surefire No. 1 overall pick like Trevor Lawrence or Joe Burrow in the mix, the game does include six of the top quarterback prospects.

They’ve all undergone three days of practices and a whirlwind of meetings trying to prove they have the makings of an NFL quarterback on and off the field.

“We all have different strengths and weakness,” said Willis, who started his career at Auburn. “But I don’t know, I feel like I’m a really blessed individual. I think I’m the best and I think they should as well.”

Willis wants to shed the small-school label, which he feels is overblown. But he didn’t get much chance to shine in two games against Power 5 teams, getting sacked nine times against Mississippi and six by Syracuse.

“You all focus on that a little bit too much, in my opinion. I mean, it’s just more people at the game.”

That small college group would include Zappe, a transer from Houston Baptist who passed for 5,967 yards and 62 touchdowns against 11 interceptions last season.

Pickett won the Johnny Unitas Golden Arm Award for the top senior or fourth-year junior quarterback, leading Pittsburgh to its first Atlantic Coast Conference championship before opting out of the Peach Bowl. The 11 wins were the most since the Dan Marino-led 1981 team and he set a league record with 42 touchdown passes.

Pickett appears to have emerged as a likely first-round pick after returning for one more season upon hearing projections that he might not hear his name called until Day 3 of the draft.

“I was thinking of myself as a higher player than that,” Pickett said. “I wanted to come back and really improve my game and have no regrets in this process and give everything I had one last season, win a championship and then attack this process.”

"I can handle any system a coordinator wants to run and I can make any throw on the field.”

They're all looking to show Saturday why they should be the first one quarterback off the board in April.