Struggling Spartans try to get back on track at Maryland 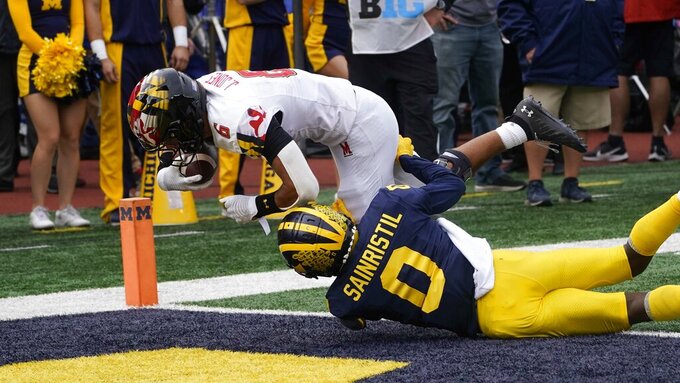 Line: Maryland by 7 1/2, according to FanDuel Sportsbook.

Maryland is coming off its first loss of the season, but it was a credible performance in a seven-point defeat at Michigan. The Terrapins have three of their next four games at home, positioning them to show real progress after going 3-7 in October games under fourth-year coach Mike Locksley. Michigan State is coming off consecutive losses to Washington and Minnesota and could use a win here to keep the season from going south.

Payton Thorne vs. the Maryland secondary. Thorne threw four touchdown passes when Michigan State beat the Terrapins last year, but he was intercepted twice in last weekend's loss to Minnesota, and backup Noah Kim produced the team's only scoring drive.

Michigan State: DL/LB Jacoby Windmon. He's already forced five fumbles to lead the FBS, and he also has 5 1/2 sacks. The UNLV transfer was the first Spartans player to win Big Ten defensive player of the week honors two straight times when he did it in Weeks 1 and 2.

Maryland: QB Taulia Tagovailoa. He's completing 75% of his passes and has thrown for 1,102 yards in four games. He's also a threat to run.

Maryland is averaging 7.37 yards per play, trailing only Ohio State and Michigan in the Big Ten. ... Bryce Baringer set Michigan State's single-season record with 48.4 yards per punt last year. He's averaging 53 yards this season. ... Antwain Littleton II has scored a touchdown in five straight games for the Terps, dating to last season. ... Michigan State has won the past four meetings in the series.