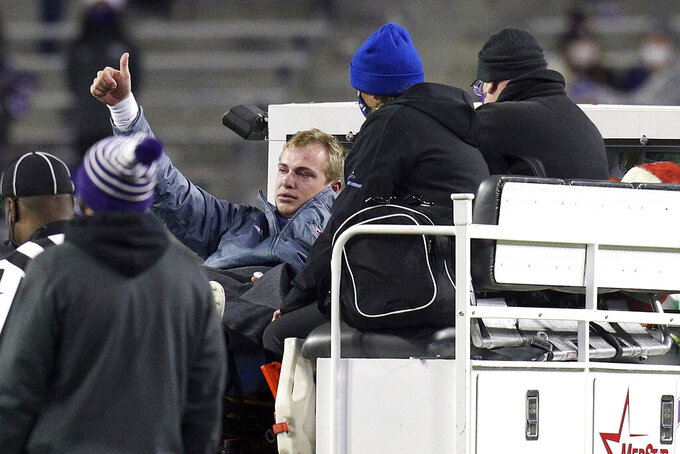 Louisiana Tech quarterback Luke Anthony (9) gestures as he is driven off the field after sustaining an injury in the fourth quarter during an NCAA college football game against TCU, Saturday, Dec. 12, 2020. (AP Photo/ Richard W. Rodriguez)

The TCU quarterback's concern after the game, along with everyone else, centered around Louisiana Tech quarterback Luke Anthony after the Horned Frogs routed the Bulldogs 52-10 on Saturday night in a regular-season finale added for both teams in this pandemic-altered season.

Anthony, who played high school football not far from the TCU campus in Fort Worth, severely injured his lower right leg when he was tackled late in the fourth quarter.

Coach Skip Holtz said the graduate transfer from Abilene Christian was expected to have surgery at a local hospital, and Holtz and other members of the staff planned to stay with Anthony while the rest of the team returned to campus. Holtz didn't mention anything specific about the injury.

“I feel for him,” said Duggan, who was 10 of 13 for 160 yards before leaving the blowout before the end of the third quarter. “I went through an injury my junior year (in high school), an ankle. He’s a great player. Just praying for him.”

Anthony, who threw for Louisiana Tech's only touchdown, was shown talking on a cell phone while lying on the field before teammates crowded around to greet him as he was put on a stretcher and taken off on a cart. Anthony flashed several thumbs-up signs while fighting his emotions as he left the field. Holtz said his parents were with him at a hospital.

“All he kept saying is he loves his teammates,” Holtz said. “He appreciates them, the way they wrapped their arms around him, how much he loves being part of this team. It was a hard thing as a coach to sit there and see one of your players go through an injury like that.”

Duggan ran for his 10th touchdown and connected on a scoring throw of 70-plus yards for the second consecutive game, a 76-yarder to freshman Quentin Johnston. The other was a 71-yard go-ahead toss to Derius Davis in last week’s 29-22 victory over then-No. 19 Oklahoma State.

Freshman Zach Evans had a 75-yard touchdown run on the first play of the second half for a 38-0 lead and finished with 130 yards rushing and two scores as TCU (6-4) won for the fifth time in six games after a 1-3 start. The only nonconference game for the Horned Frogs allowed them to play the full 10-game schedule under the Big 12's pandemic guidelines.

“The bottom line is we’ve gotten better,” said Gary Patterson, who completed his 20th regular season as TCU's coach. “I think the younger guys, like I told them in pregame, they’ve all grown up. The guys in that room are much stronger, much more mature than they were when we started back in August.”

Aaron Allen threw the first of two interceptions on his first play and lost a fumble two possessions later after replacing Anthony, who has been the starter in the rotating quarterback system for the Bulldogs (5-4).

Duggan's 5-yard run for the Horned Frogs' first TD — the sophomore's 16th career rushing score — came after Allen's pass went through the hands of Griffin Hebert and was intercepted by C.J. Ceasar, who returned it to the Louisiana Tech 8. Ceasar, who grew up in Louisiana, intercepted Allen again in the second half.

Evans ran 4 yards for a 24-0 lead early in the second quarter after Allen was hit by Garret Wallow and TCU's Ochaun Mathis recovered at the Bulldogs' 23. Mathis had two of TCU's five sacks.

Johnston, who caught five passes for 133 yards in the freshman's second straight 100-yard game, added a 1-yard scoring run on a reverse handoff.

“He’s so talented and he’s such a good playmaker,” Duggan said. “I’m going to try to get him the ball as fast as I can just so he can do his thing. You can see what happens when get he gets the ball.”

Louisiana Tech: The Bulldogs missed a chance to build some momentum for a bowl game with their second trip to the Dallas area in as many weeks after not playing for a month. Four straight games were postponed or canceled for COVID-19 reasons before a 42-31 win at North Texas in a rescheduled game last week.

TCU: The Horned Frogs were inside the Louisiana Tech 5 on their first two possessions but had just three points to show for it. They answered those missed opportunities with touchdowns on six consecutive possessions before Duggan was pulled with a 42-point lead with six minutes left in the third quarter.

Kendre Miller ran 38 and 89 yards for touchdowns in the second half, finishing with 136 yards on five carries as the Horned Frogs rolled up 333 yards rushing. TCU has rushed for at least 236 yards in each of its past five victories.

Field position was lopsided in the first quarter, with the Bulldogs starting inside their 15 all four times while TCU opened all three of its possessions in Louisiana Tech territory. The Bulldogs hurt themselves with penalties on kickoffs twice, including one that wiped out a return to near midfield and forced them to start at their 12-yard line.

Both teams are probably headed to bowl games.