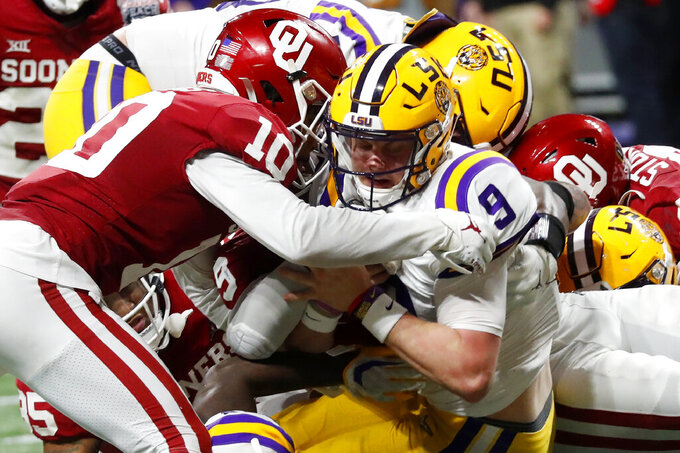 LSU quarterback Joe Burrow (9) runs into the end zone for a touchdown against Oklahoma during the second half of the Peach Bowl NCAA semifinal college football playoff game, Saturday, Dec. 28, 2019, in Atlanta. (AP Photo/John Bazemore)

No. 3 Clemson is an underdog — again.

Once more, the defending national champions have to deal with being labeled second best when they face No. 1 LSU for the College Football Playoff title in New Orleans on Jan. 13.

The Tigers started as the preseason No. 1. Yet, early on, looked ragged on offense and in particular, at quarterback. Last year's freshman star Trevor Lawrence had thrown five interceptions his first three games — more than the four he'd thrown in all his national championship winning debut.

“Trevor threw a couple of interceptions and that sort of became the narrative,” Swinney said Monday.

The tipping point came in a 21-20 late escape at North Carolina on Sept. 28. Despite the win, the Tigers fell from the top spot and kept sliding — they were No. 5 in the first CFP rankings.

“The story was more about who we played,” Swinney said. “Trying to create how bad (the Atlantic Coast Conference is) rather than who we are.”

Clemson, however, kept rolling and defeated each of their last eight opponents heading into the Fiesta Bowl by 29 points or more. Lawrence found his game again, too, with 26 touchdowns and just three interceptions in that stretch.

The quarterback laughs off the early criticism, remembering how last January after his bravura championship game many commentators said he should withdraw from school and spend the next two years prepping for the NFL.

“Those same ones were telling me all the mistakes I was making" this season, Lawrence said.

Clemson may have silenced a few doubters with its Fiesta Bowl victory. After falling behind 16-0 in the opening half, the Tigers rallied for a dramatic, fourth-quarter victory.

Lawrence led a 94-yard, four-play drive that ended with Travis Etienne's 35-yard touchdown catch with 1:49 left to put Clemson ahead for good.

The Tigers ended Ohio State's comeback on safety Nolan Turner's interception in the end zone in the final seconds.

Smith and Lawrence believe Clemson's experience in the title game is an edge LSU can't match.

The fifth-year senior has been part of all four even if was a never-used redshirt freshman in Clemson's 45-40 loss to Alabama following the 2015 season.

“We have guys who have been in that moment and can draw back on that,” Smith said.

Lawrence is comfortable with his team's experience, although he does not see it as a factor when it comes to slowing down top-ranked LSU.

“Even though they haven't played in the national championship (game) before," Lawrence said of his opponent, “they're not thinking about that."

Swinney is giving his team a couple of days off — the Tigers got back from Phoenix late Sunday — to recuperate and recover from a physical matchup with the Buckeyes.

Any lapses against Ohio State will have to be cleaned up in Clemson's final set of practices before taking on LSU, which had a dominant showing from quarterback Joe Burrow in the 63-28 dismantling of Oklahoma in the Peach Bowl.

And while Clemson won't be the favorite, Swinney is certain his team won't be downgraded, either.

“We've played somebody now,” Swinney said. “I think Ohio State is a pretty good team. And our guys still found a way to win."