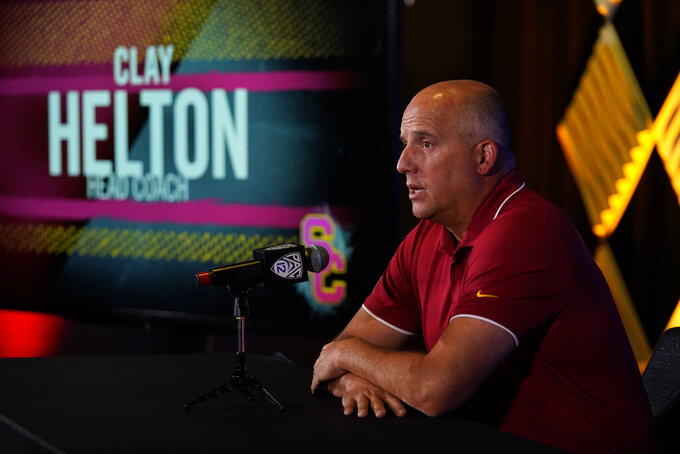 He could have taken Helton off the proverbial hot seat before his sixth season leading the Trojans, who are ranked 15th in The Associated Press Top 25 preseason poll and expected to contend for the Pac-12 title.

But Bohn declined Thursday to offer his full support for Helton, only going as far as downplaying the idea the upcoming campaign would be one that makes or breaks his position leading the most storied college football program on the West Coast.

“For those that know our program, we recognize the improvement in the program and all the different things we’re doing. Our trajectory is strong, so I don’t think that’s accurate,” Bohn said. “We know the championship expectations. We’re competitive. That’s why we’re here and that’s why we continue to make the improvements that we make, but some of those national people maybe don’t understand all the different things that are going on here. And all you have to do is watch these young players and the way this recruiting class is really producing for him and us, and we’re encouraged.”

Helton has been under pressure practically from the moment he was named the permanent head coach prior to the 2017 Pac-12 championship game. He is 39-21 since then, with one conference title, a Rose Bowl win, and two division crowns to his credit.

However, USC has never been in serious contention for the College Football Playoff during his tenure, lost three straight games to intersectional rival Notre Dame, and sustained blowout losses to Alabama and Ohio State that reflect how far it has been from contending for national titles.

Coming off a shortened 2020 season because of the COVID-19 pandemic where the Trojans went 5-0 in conference games before losing in the Pac-12 title game to Oregon on their home field, Bohn said he expects Helton to be in the mix for the top prizes in the sport going forward.

“And this year we’re ranked 15 to start the season, so we’re making progress. But we recognize that the expectation and the history is for us to get to the CFP, and that’s certainly our goal. That’s what we’re trying to do. I know that’s what these young men are trying to do,” Bohn said.

Since replacing Lynn Swann in November 2019, Bohn has focused much of his attention on putting the resources in place for Helton to succeed on the field by adding non-coaching personnel.

Compared to other national powers, USC has lacked numbers in areas such as recruiting and player development. Bohn and chief of staff Brandon Sosna have helped bring in analysts, support staffers, and sports scientists, and the emphasis on structural development for the football program was a constant refrain from them during the media availability.

Sosna said he keeps two notes from his initial meetings with Helton on his desk to constantly remind him of areas that need improvement.

“We’re really excited that I think we’ve ticked off almost every single one of those boxes and continue to look at it every single day,” said Sosna, who declined to discuss a report by Yahoo Sports that he recently met with the Detroit Lions.

The emphasis seems to have paid off. After signing a historically poor recruiting class by its standards in 2020, USC bounced back by adding a consensus top-10 haul that includes standout edge rusher Korey Foreman and several others expected to contribute as freshmen.

The initial returns from those additions are why Bohn believes USC is better positioned to achieve its goals this season.

“When you think of championship expectations, it requires championship support. And I believe we’ve made strides associated with that, and Brandon has been a big part of helping envision that along with Clay,” Bohn said. “So our expectations are what they’ve always been. We want to be in the Rose Bowl and be a part of that College Football Playoff. Those are our goals.”