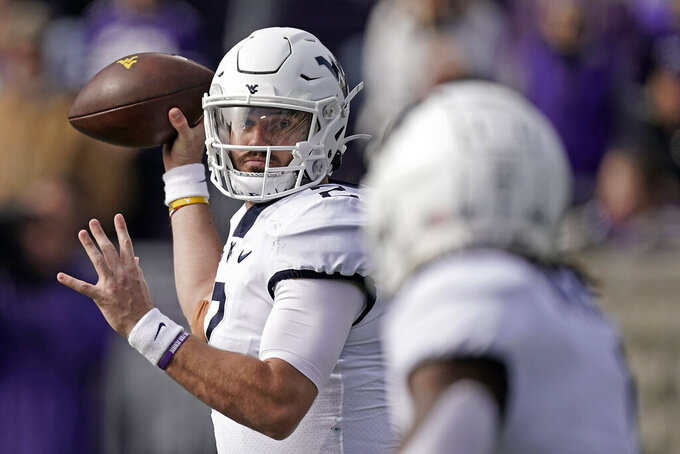 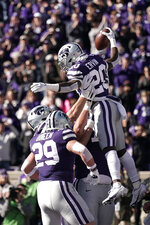 Finally, the Wildcats did the same thing on fourth down to dash them.

Deuce Vaughn ran for 121 yards and a touchdown, Sammy Wheeler had a touchdown catch along with a crucial fourth-down grab that led to the clinching fourth-quarter score, and the Wildcats held off the mistake-prone Mountaineers 34-17 on Saturday snap a five-game losing streak in the series.

“The belief, the confidence, the expectation -- those are kind of the three terms we've come up with the last three weeks,” Kansas State coach Chris Klieman said. “Have confidence that you know the plan and can execute the plan, have belief in yourself and each other and then raise the expectation each week.

“This is a big-time win,” Klieman added, “because we haven't had a whole lot of success against them.”

Skylar Thompson had just 138 yards passing for the Wildcats (7-3, 4-3 Big 12), but the senior made a couple clutch throws when the Mountaineers (4-6, 2-5) had whittled a 24-3 deficit to seven midway through the fourth quarter.

Jarret Doege had 268 yards passing with two touchdowns and two interceptions for West Virginia, which was just 5 for 14 on third down but 3 for 4 on fourth. Leddie Brown added 85 yards on the ground.

“They did absolutely nothing in the game to beat themselves,” West Virginia coach Neal Brown said, “and that's hard, and they did that. Zero turnovers. They had one penalty the entire game. They didn't have any unforced errors.”

West Virginia began digging a big hole when Doege was picked on the game's second play, his throw skipping off Winston Wright Jr.'s hands and into those of Russ Yeast. Kansas State promptly marched 55 yards to take a 7-0 lead.

A few minutes later, the Mountaineers' VanDarius Cowan hit Thompson with a helmet-to-helmet blow and was ejected.

“The ball was clearly out,” Brown said. “I can't explain that.”

West Virginia eventually got the ball back, but a personal foul for a chop block forced a punt. The Wildcats' Ty Bowman slipped around the edge to block it, and teammate Marvin Martin picked up the loose ball for a 14-0 lead.

“We kind of doctored up this punt block all week that we thought we could get,” Klieman said.

The problems continued for West Virginia when it gambled on fourth-and-6 at the Kansas State 29 near the end of the first quarter; Doege was sacked for a turnover-on-downs. And when the Mountaineers faced fourth-and-3 later in the second quarter at nearly the same spot on the field, they tried the field goal and Casey Legg pushed it wide right.

The Wildcats extended their lead to 24-3 early in the second half. Malik Knowles nearly broke the opening kickoff for a TD and Thompson took advantage of the good field position to hit Wheeler for the score.

That's when the Mountaineers got on track for the first time all game.

Late in the third quarter, Doege hit Kaden Prather to convert on fourth down. Then, the senior quarterback found Reese Smith from 13 yards out for West Virginia's first touchdown in 21 possessions spanning three games.

It wasn't the last, either.

After the Wildcats missed a own chip-shot field goal, the Mountaineers went 80 yards the other way. Brown converted on fourth-and-1 early in the drive, and Doege finished it by finding Wright in the end zone on fourth-and-goal from the Kansas State 3 to get West Virginia within 24-17 with 11:50 to go.

But the Wildcats proved they can convert on fourth down, too.

Facing fourth-and-9 near midfield, Thompson threw a rope to Wheeler for a 35-yard gain — improving Kansas State to 12 of 14 on fourth downs this year. Vaughn capped the 63-yard drive with a touchdown run to put the game away.

“We had not done a great job of stopping those guys,” Klieman said of the fourth-down gamble. “I looked at Skylar and said, ‘This is yours. What do you like? We need a touchdown. We didn’t come here to hang on to win. We came here to win the football game.”

West Virginia simply couldn't overcome the early mistakes, even though it played nearly flawless most of the second half. Now, the Mountaineers need to beat Texas and Kansas the next two weeks to become bowl-eligible.

Kansas State is working on a better bowl destination now. The Wildcats have ripped off four straight wins heading into a big game against Baylor on Senior Day in Manhattan, then they finish the regular season at Texas.

West Virginia: The Mountaineers return home to play the Longhorns on Saturday.

Kansas State: The Wildcats play the Bears the same night.