Arkansas gets to test rebuilt roster vs. Portland St. 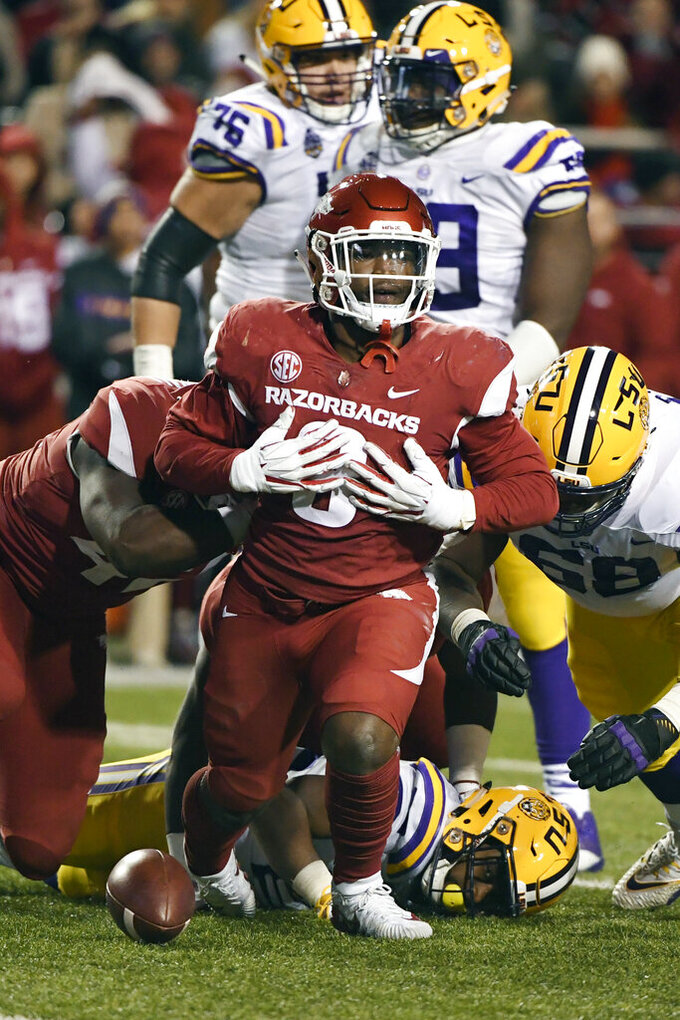 FILE - In this Nov. 10, 2018, file photo, Arkansas defensive back De'Jon Harris celebrates after a tackle against LSU during the second half of an NCAA college football game in Fayetteville, Ark. The Razorbacks did not win an SEC game in coach Chad Morris’ first season, but Harris was one of the best _ and busiest _ linebackers in the conference. Harris led the SEC in tackles with 118. (AP Photo/Michael Woods, File)

FAYETTEVILLE, Ark. (AP) — Chad Morris told a large gathering of media and athletic officials at his first news conference in December 2017 that he "would walk backward from Texas to Fayetteville" to get the chance to lead the Arkansas football program.

The second-year Razorbacks coach could have saved himself a few thousand steps by jumping on a bulldozer to make that trip. That kind of heavy equipment, metaphorically speaking, would come in handy with the demolition work Morris has launched in rebuilding one of the SEC's most dormant programs.

"This can be done. I promise you it can be done or I wouldn't be here," Morris said as the Razorbacks prepared to open the season at home Saturday against Portland State. "This is not an overnight fix. I've said it since I got here. This doesn't happen overnight, especially when you look at a snapshot of Razorback football the last 10-12 years. I think that we're building something special in the program and I'm committed to doing that.

"So without a doubt, I would walk backward to Fayetteville, because this is going to be a special place."

Arkansas was 2-10 in Morris' first season and winless in the SEC. After that, Morris and his coaches began an almost complete overhaul of the roster. Despite the dismal season, Arkansas had its best recruiting haul ever, according to multiple recruiting outlets.

The roster heading into the opener features a whopping 53 freshmen, including 36 true freshmen. The two-deep roster features 13 freshmen, including nine true freshmen. And the newcomers aren't just of the fresh-out-of-high-school variety. Senior transfer quarterback Ben Hicks (SMU) will get the start against the Vikings after Morris named him ahead of fellow transfer Nick Starkel (Texas A&M).

"Ben has earned the right to be the starter in week one," Morris said. "We feel confident in his overall knowledge of the offense his command of knowing where everyone should be. We're playing a lot of young guys and that alone was the main deciding factor. His ability to know where everyone is supposed to be and the line to provide the right protection and do it at the pace we need."

Arkansas is not just all wet-behind-the-ears newcomers. Junior Rakeem Boyd returns after leading the team with 734 yards rushing. Boyd rushed for more than 100 yards three times in 2018.

Portland State is also hoping to see a rebound from a 4-7 season in 2018. The Vikings return nine starters on offense and eight on defense. Tight end Charlie Taumoepeau is the headliner after catching 28 passes for 580 yards last season despite missing several games with injuries. Quarterback Davis Alexander started 10 games last season and compiled more than 2,000 yards passing and rushing.

"We're going to have to play one hell of a game," Portland State fifth-year coach Bob Barnum said in a WholeHogsports interview. "The odds guys in Las Vegas don't give us a snowball's shot in hell to win, but we have to make sure we don't lose the game before we get there.

There are seven freshmen listed on Arkansas' two-deep roster on offense, including five true freshmen. Two of the three receiver spots are topped by freshmen, including Treylon Burks and Trey Knox. Freshman T.Q. Jackson will back up Knox, while two sophomores are behind Burks. Mike Woods, a sophomore, is the other starting receiver.

After last season, Arkansas tore out the synthetic surface in Razorback Stadium and replaced it with natural grass. The grass surface was something Morris mentioned when he was hired, but a stadium building project delayed the turf replacement until this offseason.

Portland State junior offensive lineman John Krahn literally stands out in a crowd. The transfer from Riverside Community College is listed at 6-10, 410 pounds on the Vikings' depth chart. His arm length is measured at 36.5 inches.

Deante Strickland, a senior for the Vikings, spent two seasons on the Portland State men's basketball team, but was set to join the football team this season before he was killed on Aug. 2. He was 22. Strickland's sister, Tamena Strickland, was arrested in the shooting. Two other family members were also shot.

By John Zenor 20 minutes ago
By Pete Iacobelli 2 hrs ago
3 hrs ago
By Ralph D. Russo 6 hrs ago
By Ken Powtak 19 hrs ago