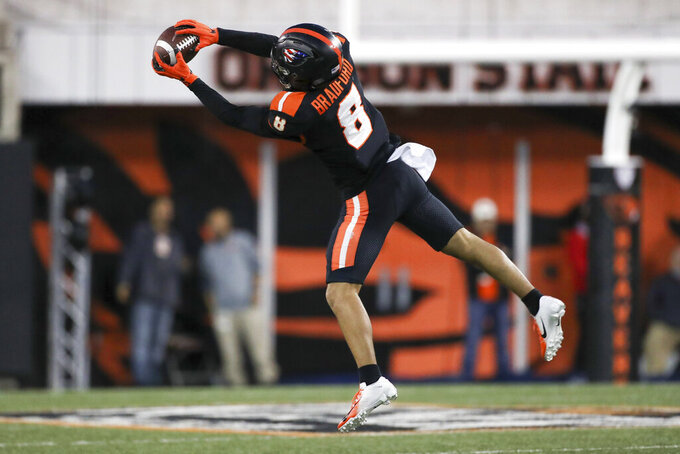 “Whether it’s the relief of getting to six or whatnot, I know we’re there now, and I’m hoping these guys will let it rip on Saturday,” he said.

The Sun Devils are also bowl eligible and in a tight race with Utah for the Pac-12 South title and a spot in the conference championship game.

But they'll need help, and lots of it. Because Arizona State fell to No. 24 Utah for the tiebreaker, the Sun Devils need the Utes to lose both of their remaining games — against No. 4 Oregon and Colorado.

Arizona State, in turn, would need to win its final games, first against the Beavers and then against rival Arizona on Thanksgiving weekend.

A tall order, for sure. But ASU coach Herm Edwards said his team has been resilient.

“I think if you just stay together, you get through the valleys, and there’s some peaks,” Edwards said. “That's football. It’s happens at every level, professional level, college level. I think how you handle them is very important.”

With a win, Oregon State will finish undefeated at home this season for the first time since 2000. The Beavers visit the Ducks next Friday in the annual rivalry game.

Oregon State's B.J. Baylor, who leads the Pac-12 with an average of 105 yards a game, has become the league's first running back to cross the 1,000-yard threshold this season. He has rushed for 1,050 yards with 12 touchdowns.

He's the ninth player in Oregon State history to rush for as many yards in a season.

“He’d be one of the first to tell you he’s got some help around him — O-line, tight ends, and things," Smith said. "I do give him a lot of credit and respect for being patient from when he arrived here, continuing to work hard. (He) didn’t see a bunch of carries, had some guys in front of him. That’s not always easy, but he kept plugging away and he’s reaping the benefit of it right now.”

Rachaad White rushed for 184 yards and two touchdowns last weekend in ASU's victory over Washington. White ranks second in the Pac-12 — behind Baylor — with 96.6 yards a game. He has 14 touchdowns.

“The more you see him carry the ball, the more you just kind of watch him and go, ‘Wow!’ Edwards said. ”He got one called back on a foul, it’s a shame. He’s really literally carrying the offense on his back right now."

Quarterback Jayden Daniels ran for 56 yards and a touchdown against the Huskies and the Sun Devils amassed 286 yards on the ground as a team.

ASU, coming off a win at Washington, heads back to the Pacific Northwest for the game against Oregon State. That's fairly unusual: Only six teams have made back-to-back trips to the region since the conference expanded.

It's also the fifth time since 2011 that the Sun Devils are playing the Beavers in Corvallis. The teams have only met in Tempe once.

Oregon and Arizona State have been pretty evenly matched for the better part of the last decade, going 8-8 in their last 16 games.

Oregon State will honor the 2001 Fiesta Bowl team at Saturday's game, wearing duplicates of that team's uniforms. The team, which beat Notre Dame 41-9, is being inducted into the Oregon State Hall of Fame on Friday.

Dennis Erickson was coach of the team and Smith was his quarterback.

“We’ve got the uniforms for it,” Smith said. "It should be a lot of fun. (I have) meaningful relationships with those guys, memories of wins, the locker rooms, the times in downtown Corvallis.”