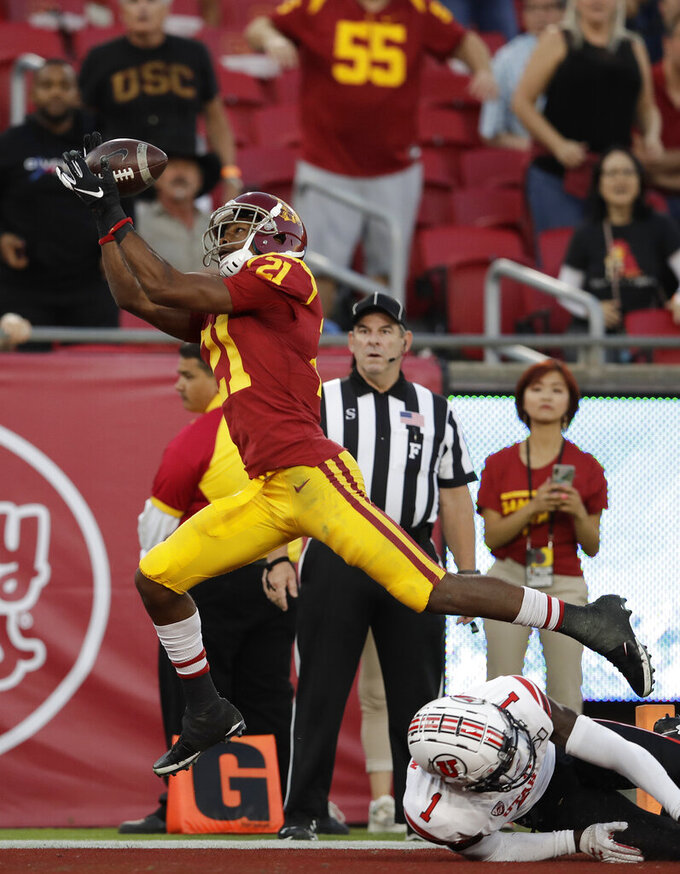 A few weeks later, Fink found himself passing for 351 yards, leading a victory over No. 10 Utah at the roaring Coliseum, and sitting between Reggie Bush and Matt Leinart for a postgame interview on national television.

Fink didn't give up on his USC dream, and the Trojans are grateful they had such a talented backup to their backup.

Michael Pittman Jr. caught 10 passes for a career-high 232 yards and a touchdown from Fink in USC's 30-23 victory over the Utes on Friday night.

Fink went 21 of 30 with three touchdown passes for USC (3-1, 2-0 Pac-12) after taking over when freshman Kedon Slovis left with a possible concussion on the second play of the game. Fink mostly looked sharp as the third quarterback to play important snaps in four games for the Trojans, who lost starter J.T. Daniels to a season-ending knee injury in their opener.

"I don't think this moment was too big for me," Fink said. "I've been in the era of Sam Darnold, and I've seen things that are much crazier. Getting in today and showing what I can do is what I really wanted to do by staying here."

After barely playing the past two seasons, Fink nearly went to Illinois as a graduate transfer last spring. The Los Angeles-area native instead decided to stay home and wait for a chance, however remote.

"In a world where everybody goes different places, this one stayed for his family, waiting for his moment, waiting for his memory," USC coach Clay Helton said. "And what a memory it was tonight. When his number was called, he made the most of it tonight."

Tyler Vaughns, Amon-Ra St. Brown and Pittman all caught TD passes from Fink, while Pittman had the fifth-biggest receiving yardage game in USC history. His remarkable 42-yard catch in the fourth quarter eventually led to a 4-yard TD run by Markese Stepp , who celebrated by handing the ball to Bush, the Trojans great attending the game as a broadcaster despite his NCAA-mandated disassociation from his school.

Tyler Huntley passed for 210 yards and ran for 60 more, but the Utes committed 16 penalties for 120 yards and struggled to get key defensive stops against a green Trojans quarterback and his stellar receivers.

"Mostly we had no answer for their receiving corps," Utah coach Kyle Whittingham said. "Michael Pittman did a number on us. We just didn't do a good enough job on him. We've got to rethink some things coaching-wise."

With Bush and Urban Meyer watching at the Coliseum as part of Fox Sports' broadcast crew, USC's roller coaster season went on the upswing again after last week's embarrassing overtime loss at BYU.

Slovis had played two encouraging games as the starter after replacing Daniels, but he couldn't continue after 335-pound Utah defensive tackle Leki Fotu landed on him. Helton said Slovis "got dinged," and the USC medical staff held him out.

Fink jumped into USC's Air Raid offense and completed eight of his first nine throws during two game-opening touchdown drives in which he relied heavily on his receivers' playmaking abilities.

Pittman then scored on a brilliant 77-yard catch early in the third quarter, snatching a long pass away from defenders and fending them off on his run.

Utah's mistakes weren't limited to penalties. USC blocked a field goal attempt, and the Utes also fumbled near the USC goal line 16 seconds before halftime, when they trailed 14-10 despite racking up 284 yards and controlling the ball for more than 20 minutes.

"We were supposed to take advantage of our chances in the red zone," said Huntley, who took his first two sacks of the season. "We all know the plays were there. We just had to make them."

USC's defense came up big in the second half. Isaiah Pola-Mao's third-down sack from the USC 1 forced Utah to kick a field goal, and Trojans freshman sensation Drake Jackson then got hold of Huntley in the end zone and forced intentional grounding for a safety with 8:51 to play.

Fans around the Fox Sports broadcast stage let loose several chants of "Reggie! Reggie!" for Bush. The retired tailback is still formally disassociated from USC under terms of the NCAA ruling against the school in 2010, but he remains wildly popular among USC fans and current players whose first Trojans memories include Bush's feats. Meyer is on top of many USC fans' lists of coaches to replace Helton, but the embattled incumbent is off to a fairly strong start.

Utah: Losing Moss is an enormous blow to any offense, and his long-term health could determine the Utes' chances for a run at a second straight Pac-12 title. Utah's inability to finish drives only gets worse with Moss sidelined, and while Huntley's valiant effort might win future games, it wasn't enough against the Trojans.

USC: Another quarterback injury wasn't enough to slow down the Trojans, even against a solid Utah defense that essentially wiped out their running game. Fink did enough to win, and USC's defense made several big plays. USC is somehow 3-1 after four games of an extremely difficult six-game start to the season, with Helton finding yet another way to fend off the doubters for another week.

Utah: A late-night visit from Washington State and its Air Raid offense next Saturday, Sept. 28.