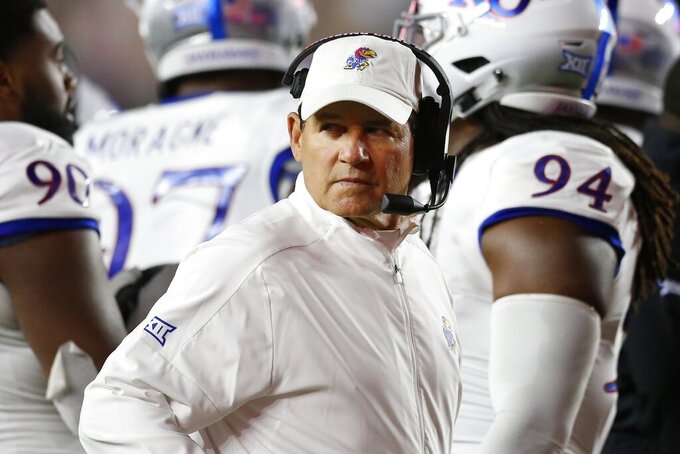 FILE - In this Sept. 13, 2019, file photo, Kansas coach Les Miles stands with his team during a timeout in the second half of an NCAA college football game against Boston College in Boston. Kansas plays Baylor this week in Baylor coach Dave Aranda's debut. (AP Photo/Michael Dwyer, File)

Some things to watch Saturday in the Big 12, when conference play starts in the league's 25th season. It will be the season openers for TCU and Baylor, who weren't able to play their scheduled non-conference games because of COVID-19:

Kansas State (0-1) at No. 3 Oklahoma (1-0): The Sooners had a five-year road winning streak — until going to Manhattan last October, when Wildcats quarterback Skylar Thompson ran for four touchdowns in a 48-41 win. Thompson is now set to make his 29th career start, this time in Norman, where Oklahoma is 19-1 in coach Lincoln Riley's four seasons. After that lone conference loss last season, the Sooners went on to win the Big 12 title for the fifth year in a row. Two weeks ago, Spencer Rattler became the first Oklahoma freshman to throw four touchdowns in his starting debut, a 48-0 win over Missouri State. Thompson threw two TDs as K-State fell 35-31 when Arkansas State scored in the final minute.

Dave Aranda's head coaching debut with Baylor vs. Les Miles and Kansas. Miles was still LSU's head coach in 2016 when he hired Aranda as defensive coordinator, after three years in that role at Wisconsin. Miles, already under pressure nine years after his national title with the Tigers, was fired along with his offensive coordinator after a 2-2 start in 2016. Aranda stayed at LSU through last season, when he was part of a 15-0 national championship before becoming Baylor's coach. Miles is in his second year at Kansas (0-1).

TCU, which plays Iowa State, has won 18 home openers in a row. ... Four Big 12 teams had 600 total yards in their non-conference games: No. 8 Texas, Texas Tech, West Virginia and Oklahoma. ... Texas had five scoring drives of under 2 minutes in its opener against UTEP. Texas Tech, who the Longhorns play, surrendered four scoring drives of under 2 minutes against FCS team Houston Baptist. ... The average margin of victory in Big 12 league games last season was 12.9 points, the slimmest among all FBS leagues

Oklahoma State junior running back Chuba Hubbard has rushed for more than 100 yards in 15 of his last 18 games, and hasn't been held under 100 yards in consecutive games since midway through his freshman season. Hubbard had 93 yards in the opener against Tulsa. The Cowboys now play West Virginia — Hubbard had 134 and 106 yards in his two games against the Mountaineers.

Iowa State senior defensive end JaQuan Bailey has 18 1/2 career sacks, already tied for the most in school history and the third-most among active FBS players. He didn't have any last season when was limited to only four games because of a leg injury.