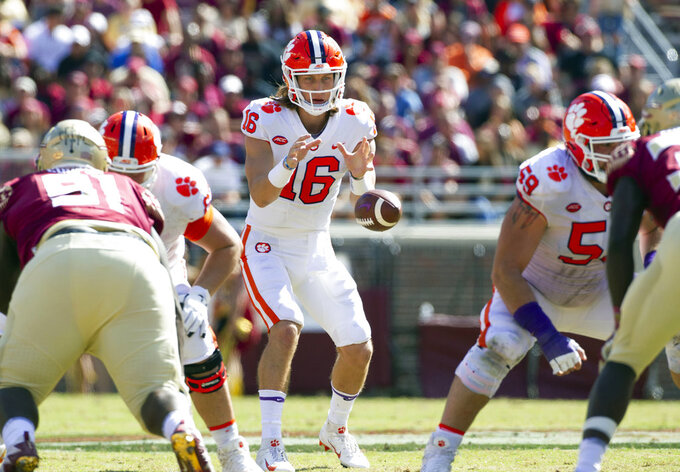 Lawrence, the long-haired, 6-foot-6 freshman , has lived up to the hype surrounding him since enrolling at Clemson (8-0, 5-0 Atlantic Coast Conference, CFP 2).

And he gracefully handled a potentially locker-room-dividing situation for the Tigers after popular starting quarterback Kelly Bryant left the program after his demotion last month.

"Yeah, I mean that helps just knowing I'm the definite starter and knowing I can lead these guys," Lawrence said.

Lawrence has been groomed to lead whatever team he was on.

Cartersville High coach Joey King scrapped his guideline about eighth graders practicing with high schoolers when he saw the then 6-2 Lawrence's skill.

When he arrived at Clemson in January, four quarterbacks including Bryant and former five-star prospect Hunter Johnson chose to leave.

For Clemson coach Dabo Swinney, elevating Lawrence was a no-brainer with what he's shown at practice and on the field.

"We always say game knows game," Swinney said. "I think they all quickly realized, 'Man, this guy can play.'"

Lawrence's leadership skills were almost as essential after Bryant's departure in mid-September.

That same week, Lawrence took his offensive lineman out to eat, letting them know he appreciated their work and would do what he could to make their effort count.

"He didn't come in with a mantra of 'Oh, I was a great player. I'm going to run this,'" Clemson offensive lineman Gage Cervenka said. "He is just very humble."

Lawrence has 16 touchdown passes, four from the school's freshman record set by Kyle Parker in 2010. Lawrence is just 139 yards away from breaking Watson's total offense mark (1,666 in 2014) for a Clemson freshman.

Lawrence's tenure got off to a rocky start as the Tigers struggled early offensively in a come-from-behind win over Syracuse in his first start. Lawrence left with a neck strain before halftime and did not return.

He found his footing a week later at Wake Forest, throwing for two touchdowns as the Tigers relied heavily on their run game (three rushers with 100 yards or more) in a 63-3 win.

Lawrence has blossomed in Clemson's biggest games with 308 yards passing against North Carolina State and 314 yards a week ago at Florida State.

"When I'm looking across the field I feel like I can make any throw or put the ball where it needs to be," he said.

Lawrence's fast rise and steady approach has amazed both teammates and his coaches.

"For a young guy, just his decision making. How fast he's able to process. And then the skill set to execute it with precision, with quickness, with velocity, with timeliness. Just all of it," Clemson defensive coordinator Brent Venables said. "He knows exactly what to do."

Tigers receiver Amari Rodgers still feels the sting from two jammed fingers he got on one of Lawrence's hard-thrown passes. Another time, Rodgers turned to look for a practice pass when he conked him the facemask. "It got on me quicker than I thought," Rodgers chuckled.

Lawrence acknowledged the bumpy trek to starter and the difficulty of seeing friends like ex-Tiger quarterbacks Bryant and Johnson leave. But he knew eventually he'd take charge and is fully prepared for his moment.

"Definitely playing well right now," he said. "We've done what we've wanted to do so far."