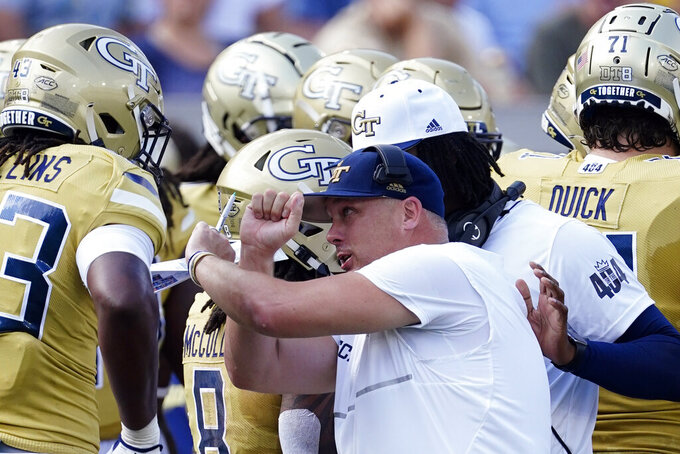 ATLANTA (AP) — Georgia Tech’s athletic association board has called a meeting for Monday and the future of football coach Geoff Collins appears to be in the balance.

Georgia Tech spokesman Mike Flynn said Sunday the meeting will be open only to board members.

The Atlanta Journal-Constitution reported, citing an unidentified source, that Collins is out after three-plus seasons.

There has been increased speculation about Collins’ status following three consecutive three-win seasons and a 1-3 start to this month. Georgia Tech athletic director Todd Stansbury, who hired Collins, has also faced increased criticism.

Collins is 10-28 at Georgia Tech. The Yellow Jackets finished 3-9 in 2021. The poor finish was capped by losses to Notre Dame and Georgia by a combined margin of 100-0.

There have been more lopsided losses this season, including 41-10 to Clemson to open the season. The Yellow Jackets were shut out by Mississippi 42-0 at home on Sept. 17.

Over their past four games against Power 5 opponents, Collins’ Jackets have been outscored 183-10. They allowed at least 41 points in each loss and were shut out in three of those games.

With Collins in need of showing improvement, the Yellow Jackets lost at Central Florida 27-10 on Saturday.

Collins said after Saturday's game he expected to remain the coach.

“My expectation, I just stood in front of the team, a bunch of young men that I absolutely love and give me all for them, and my expectation is to continue to do that,” Collins said.

Asked why he believes he should remain the coach, Collins said: “We just went out there against a really good football team and competed and played really good football at times outside of unfortunate self-inflicted mistakes. The guys were ready to go out there and play at a high level. We just fell short at some critical times.”

Collins was 15-10 in two seasons as Temple's coach before he was hired by Georgia Tech on Dec. 7, 2018. He replaced Paul Johnson, who was 83-60 in 11 seasons at Georgia Tech. Johnson had a 51-37 record in Atlantic Coast Conference games. Georgia Tech is 7-19 in conference games under Collins.

Before being hired by Temple, Collins was an assistant coach at Mississippi State from 2011-14 and he was Florida's defensive coordinator from 2015-16.