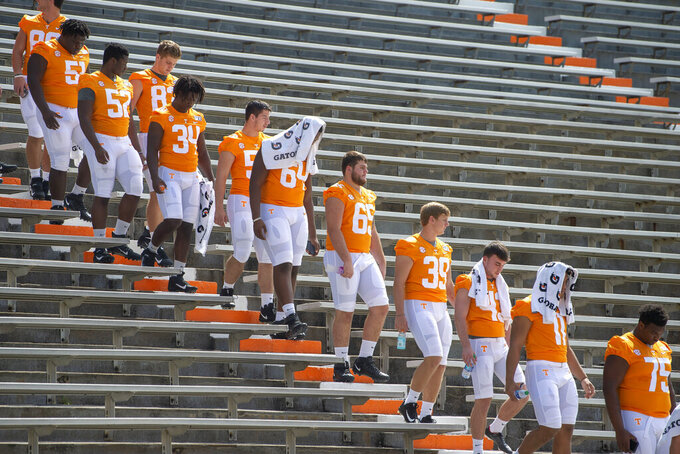 Guarantano's bid to become the best has involved studying guys who currently hold that title. He watched NFL quarterbacks such as Deshaun Watson, Aaron Rodgers and Drew Brees and also analyzed some of the college quarterbacks who have enjoyed much more success than him thus far.

"I looked at Tua," Guarantano said, referring to 2018 Heisman Trophy runner-up Tua Tagovailoa of Alabama. "I looked at (Georgia's Jake) Fromm. I looked at (Clemson's) Trevor (Lawrence) a little bit. I studied a lot of guys."

Guarantano wants to lead Tennessee back to relevance after consecutive last-place finishes in the Southeastern Conference's Eastern Division.

Although Guarantano has thrown for 16 touchdowns with only five interceptions in 385 career passes, Tennessee has gone 6-12 in the games he has started.

"Everybody has immense trust and immense respect for him," Guarantano said. "Whenever we signed him, everybody was excited because we knew his track record and knew the types of things he's done in the past. The past two days, everybody's whooping and hollering. Everybody's very excited, just having that guy around. He exerts confidence in himself and us. I think our offense is much more confident, and we know our jobs better."

Chaney and Guarantano say they've developed a mutual respect already. Chaney said he wants Guarantano to concentrate on "playing clean football, distributing it around to our playmakers and not letting him think everything rides on his shoulders."

"I've enjoyed Jarrett," Chaney said. "He's going to hopefully have a good season for us. He's hungry to do so. I think he's a very good student of football. He has a good aptitude and a good feel for the game."

Guarantano says some of the work he has done this offseason has involved fixing his footwork to become more elusive. Guarantano was sacked 26 times last season. He was sacked 22 times in 2017 despite starting just six games.

When he's had time to throw, Guarantano has shown star potential at times, most notably while passing for 328 yards in a road upset of Auburn last season. He wouldn't give his 2018 performance a letter grade but said he's learned from the setbacks he's endured.

He's eager for the chance to prove it.

NOTES: Heavy rains forced Tennessee to cancel its scheduled open practice at Neyland Stadium on Sunday. The Volunteers instead moved practice indoors and didn't make it open to the public. The Vols planned an indoor autograph session for fans after practice.