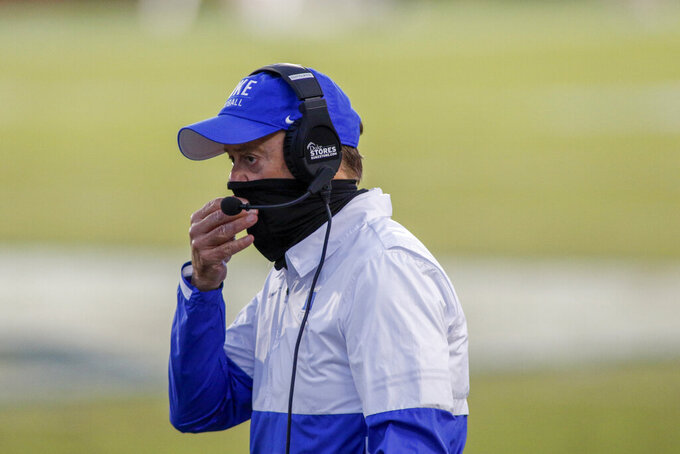 FILE - Duke head coach David Cutcliffe watches his team play against Virginia Tech during the second half of an NCAA college football game in Durham, N.C., in this Saturday, Oct. 3, 2020, file photo. The personal touch that helps coaches sell their programs to blue-chip prospects is missing from this year’s recruiting cycle. Restrictions brought about by the coronavirus pandemic prevent face-to-face communication between players and coaches. (Nell Redmond/Pool Photo via AP, File)

The personal touch that helps coaches sell their programs to blue-chip prospects is missing this year.

It all creates uncertainty as high school seniors finalize their college selections during the early signing period, which begins Wednesday. Many signings will bond a player and coach who haven’t yet spent time in the same room.

“Almost half of our players that are going to sign, we haven’t met face to face or shook hands,” Minnesota coach P.J. Fleck said.

There are various opinions over the pandemic’s short-term impact.

About 80% of last year's Football Bowl Subdivision recruits signed in December rather than waiting until February. Mike Farrell, the director of recruiting for Rivals, doesn’t expect that percentage to change while Barton Simmons, the 247Sports director of scouting, believes fewer prospects will sign early this time.

The pandemic didn’t necessarily hinder elite recruits who already were being heavily pursued. But it caused headaches for other prospects looking to raise their stock at camps or high school games that never took place.

“I’ve had several high school coaches here in Florida call me about some 2021 guys that they had who are really, really good players that had FBS offers,” South Florida recruiting coordinator Jules Montinar said. “And all of a sudden, now they’ve got nothing.”

College staffs feel hamstrung because they couldn’t evaluate players in the usual manner.

“We’ve been really dependent upon camps,” Duke coach David Cutcliffe said. “We’ve signed a lot of people out of camps where we can get our hands on guys, coach them and see what their effort levels are and what their character’s about and how good they are at the end of the day, as opposed to the beginning of the day. All of those things are just out the window.”

The lack of official visits under pandemic-imposed NCAA restrictions also has caused problems. Coaches liked seeing how each recruit interacted with prospective teammates during those visits.

“You get a better feel for kids and their families when you’re face to face,” Florida State recruiting coordinator David Johnson said. “It’s a little different on Zoom.”

Those restrictions also have prevented coaches from touring high schools or attending games. Ohio State defensive coordinator Kerry Coombs said he likes to talk to the janitor and lunch lady to learn more about the player away from football. Not this year.

“That’s hard to do, right?" Coombs said. “You can’t Zoom the janitor.”

It has been even tougher on the prospects themselves. That's particularly true in the 16 states, including California, that didn’t have a fall high school football season.

Jason Negro coaches St. John Bosco, a national prep power in Bellflower, California. He has been sending out tapes of combine-style workouts showing the height, weights, wingspans and speed of players.

He also mailed out tapes matching his cornerbacks up with Clemson-bound wide receiver and St. John Bosco senior Beaux Collins to show college staffs how those defensive backs would fare against Power Five talent. Of course, most schools without fall seasons don’t have top-100 recruits on campus to give their prospects similar showcases.

“For the West Coast states, I think there’s going to be a lot more kids who may sign in February or post-February because there’s just not going to be a lot of evidence for them to show they’re college-level athletes,” Negro said. “California. Oregon. Washington. Nevada. Those are some pretty good football areas in terms of having kids who can play at the next level who aren’t having any kind of experience.”

The former rugby player from New Zealand moved to the United States last year. Moore is listed at 6-foot-3 and 265 pounds on the 247Sports database and has Power Five physical skills.

But he lacks varsity game experience. Moore, who says he has an offer from Duke, is waiting until February to sign and hoping California’s high school football season starts by then.

“Right now, a lot of the coaches are just waiting for me to get the pads on,” Moore said.

High school juniors may get hampered even more, even if the NCAA ends the recruiting dead period April 15 rather than extending it once again.

Many Power Five programs already had assembled much of their classes or had narrowed down their targets by the time the pandemic arrived. Those schools don’t know as much about the juniors without having evaluated them in person.

“The ’22 class, you’re going to have to really be careful in your vetting and what you’re getting and not just go off statistics or old film,” Wisconsin director of player personnel Saeed Khalif said.

When the NCAA granted college athletes the opportunity for an extra year of eligibility due to the pandemic, it permitted seniors to come back without counting against their team’s 85-man scholarship limit. That 85-man limit will likely return in 2022.

That could force tough decisions on how many of this year’s high school juniors to eventually sign, extending COVID-19’s impact on recruiting long after the pandemic itself has faded.

“It’s definitely been super challenging to say the least,” Montinar said. “But the flip side to it is everyone’s playing by the same rules. It is what it is.”