Lowly Huskers believe they have winner in QB Martinez 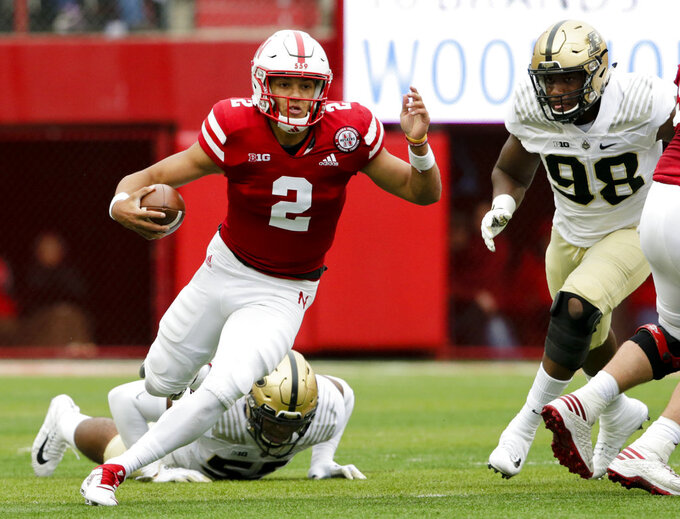 FIJLE - In this Sept. 29, 2018, file photo, Nebraska quarterback Adrian Martinez (2) carries the ball away from Purdue linebacker Derrick Barnes (55) and defensive end Kai Higgins (98) during the first half of an NCAA college football game in Lincoln, Neb. True freshman Adrian Martinez will be starting his third straight game. He’s coming off his best performance after throwing for 323 yards and running for 91 against Purdue. Nebraska plays Wisconsin on Saturday. (AP Photo/Nati Harnik, File)

LINCOLN, Neb. (AP) — Four starts into his career, Nebraska's Adrian Martinez already is showing signs of blossoming into the next standout quarterback coached by Scott Frost.

Frost has mentored some of the nation's best: 2014 Heisman Trophy winner Marcus Mariota and 2015 pass efficiency leader Vernon Adams as Oregon's offensive coordinator, and McKenzie Milton as head coach of the Central Florida team that went from winless to unbeaten in two years.

"I told you guys I'm always careful about making comparisons, but he's doing some things like quite a few of the special guys I've been around," Frost said. "There's no way I would have been ready to do what he's doing right now as an 18-year-old. It says a lot about who he is as a person."

Martinez's 0-4 record as the starter — he missed the Cornhuskers' loss to Troy because of an injury — belies the individual numbers he has posted.

He has completed 59.7 percent of his passes for 229 yards per game, with five touchdowns and three interceptions. His rushing average of 63.3 yards ranks second among Big Ten quarterbacks, behind Penn State's Trace McSorley, and would be higher if it weren't for 10 sacks.

What makes Martinez so dangerous in Frost's no-huddle spread-option offense is his ability to extend plays with his legs. He has repeatedly scrambled out of trouble, and he's elusive on designed runs. On his signature run of the season, a 41-yarder for a touchdown in the opener against Colorado, he juked a cornerback in the backfield before taking off down the sideline and somersaulting into the end zone.

At that moment, he said, his confidence skyrocketed. On the previous possession, he had fumbled.

"It was just me playing football and I realized I can do these things," he said. "I needed to be a little bit smarter with the way I was running the ball a little bit. Obviously, I still need to fix some of my ball security issues that I'm having, but knowing that I can play. I can play at this level and do it well."

That's an understatement to Northwestern coach Pat Fitzgerald, who will see Martinez up close Saturday when the Cornhuskers visit the Wildcats.

"He's a magician right now," Fitzgerald said. "He makes a lot of things happen. He's very talented with his arm, obviously athletic and makes a lot of guys miss and is very impressive to watch."

Martinez was a four-star recruit at Clovis West High School in Fresno, California, even though he missed his senior season after shoulder surgery. He originally was headed to Tennessee but flipped his commitment to Nebraska after Frost took over. He enrolled in January so he could go through spring practice and became Nebraska's first true freshman quarterback to start an opener.

The Huskers got a scare when he hurt his right knee against Colorado, but he is fully recovered now.

"Given all that I've been through, I never doubted that I'd get to this point," Martinez said. "Obviously, with the surgery it was a little bit of a tough path to this point, but once I got here I knew the hard work would pay off. With the coaches we have here and the guys we have around me, I knew what I was capable of. I still don't think I've reached my capabilities, and I don't think I'm anywhere near as good as I think I can be in the future."