Maryland starts anew under Locksley, who returns to roots 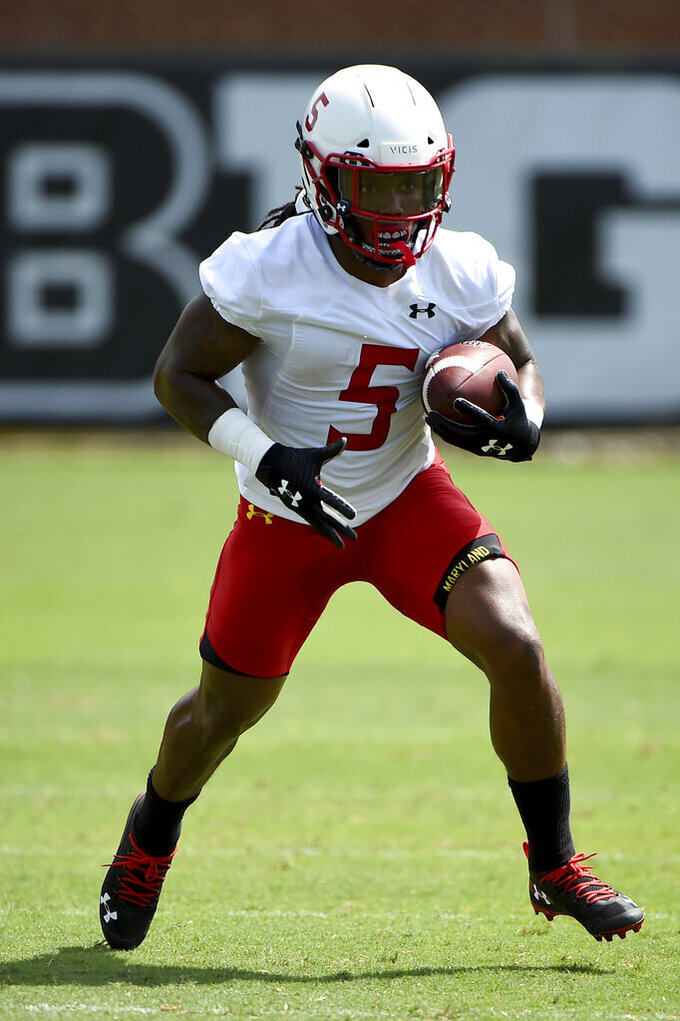 FILE - In this Aug. 2, 2019, file photo, Maryland running back Anthony McFarland works out during an NCAA college football training camp in College Park, Md. Coming off the darkest season in the history of the Maryland football program, the Terrapins are poised to enter a new era under Mike Locksley, hired in December after a successful run as Alabama's offensive coordinator, who remembers what it was like when the team competed for conference titles and counted on playing in bowl games. (AP Photo/Will Newton, File)

COLLEGE PARK, Md. (AP) — Coming off the darkest season in the history of the Maryland football program, the Terrapins are poised to enter a new era under a coach who remembers what it was like when the team competed for conference titles and regularly played in bowl games.

Mike Locksley, hired in December after a successful run as Alabama's offensive coordinator, hopes his three years with the Crimson Tide will ultimately pay off at Maryland.

"I got to see the inner workings of how and why we were able to have the success there at Alabama," Locksley said.

For now, however, the focus is respectfully moving past 2018.

The Terrapins will still honor the memory of offensive lineman Jordan McNair, who died from heat stroke last June after collapsing during a spring workout. That set off a chain of events under the national spotlight in which coach DJ Durkin was suspended, reinstated and then fired. Along the way, the culture of the program was scrutinized by University officials, and an independent panel set forth new rules for player safety.

On the field, the team paid homage to McNair at each home game. Interim coach Matt Canada managed to get the Terrapins off to a 5-3 start before four straight defeats left Maryland with a losing record and without a bowl bid for the third time in four years.

Enter Locksley, an assistant under Ralph Friedgen when Maryland won the Atlantic Coast Conference title and went to the Orange Bowl in 2001. Born and bred in Maryland and bearing deep roots to the Terps, Locksley is looking for a fresh start at his new post.

"We will be defined by what we do now. What we've done in the past doesn't really matter," Locksley said. "I like the way we've moved forward, doing it the right way."

Running back Javon Leake said, "We've been through a lot, so this season is all about coming back and doing our best."

Some things to know about the 2019 Terrapins, who open the season on Aug. 31 at home against Howard:

Locksley intends to take what he learned under Nick Saban at Alabama and make it part of Maryland's routine.

"Obviously the success we've had at Alabama, with the system of how we practice, how we structure our practices, how we develop our players on and off the field, those were all things I thought played a role in our success there," he said. "We've taken a bunch of those things and have implemented those here."

That includes an offensive scheme that rang up 45.6 points per game in 2018.

"If you're doing a scouting report," Locksley said, "you'd better watch a lot of Alabama film."

Locksley isn't the only one seeking a fresh start. Redshirt junior quarterback Josh Jackson, who transferred from Virginia Tech, expects to start for Maryland.

Jackson has the inside track because of his experience and numbers with the Hokies (25 TDs, 10 INTs).

"It's a new system, new terminology and new plays I've had to learn, but (Locksley) is a great coach and I'm really enjoying working with him," Jackson said of his rapport with Locksley.

Defensive coordinator Jon Hoke promises the Terps won't wait around to make something to happen this year.

"We do have an attack mentality, and that's how we're going to go after offenses," Hoke said.

Hoke is a big fan of defensive back Antoine Brooks, who had 9 ½ tackles for a loss in 2018,

"His skill set is good coverage, very close to the line of scrimmage," Hoke said. "He has also showed the ability to rush the passer."

Leake scored seven TDs last season as the backup to Anthony McFarland, who rushed for 1,077 yards and four scores.

That 1-2 punch, along with Jackson in a new offense, is cause of for wild optimism.

"I feel like a lot of people are sleeping on us, but they don't know the talent we have in the room," Leake said. "I can't wait to just shock the world and show what the Terps are bringing this year."