No. 12 Michigan looking to continue dominance over Hoosiers 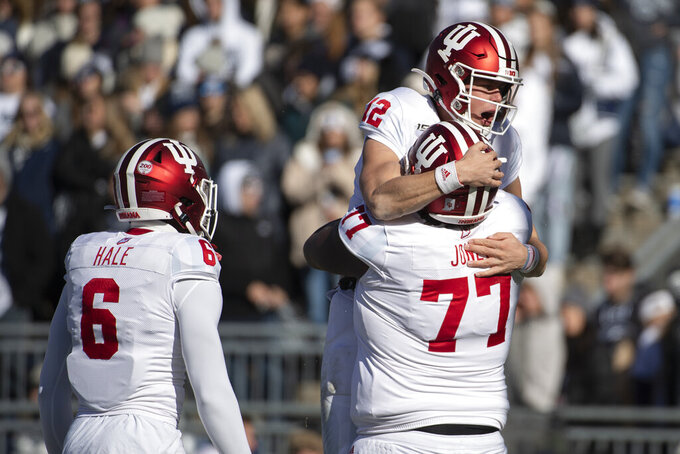 The Wolverines were eliminated from the Big Ten East title chase last weekend but there’s still plenty at stake. Michigan has won three straight, six of seven and seems to be playing its best football with rival No. 2 Ohio State up next. Two more wins could get the Wolverines a ticket to a New Years’ Day game. Indiana is trying to add another milestone to this season’s resume by ending a 16-game losing streak against Top 25 foes. A win also could help the Hoosiers make their case for a January bowl game.

Peyton Ramsey vs. Michigan’s pass defense. Ramsey has played well in place of the oft-injured Michael Penix Jr. His pass efficiency rating (157.3) is third in the Big Ten. But his worst game of the season came against the Buckeyes, the league’s top-rated pass defense. Michigan is No. 3, and Ramsey also may be without his top receiver, Whop Philyor.

Michigan: Quarterback Shea Patterson was named the conference’s co-offensive player of the week after throwing for 384 yards and four touchdowns in last week’s victory over rival Michigan State. He’s thrown seven touchdowns and no interceptions in the last three weeks, all wins, and needs to continue playing well for the Wolverines to maintain their momentum.

Indiana: Wide receivers Nick Westbrook, Donovan Hale and Ty Fryfogle must play well enough to give Ramsey options to pull off the upset — if Philyor’s undisclosed injury keeps him on the sideline.

Michigan has won 23 consecutive games in the series and 38 of the last 39. ... Indiana took the Wolverines to overtime and double overtime the last two times Michigan visited Bloomington. ... The Wolverines defense has allowed 228 yards and 11.4 points per game in the last seven contests. ... The Hoosiers have held four opponents to three or fewer points and have scored 30 or more eight times this season, one short of the single-season school record. ... Ramsey leads the Big Ten in completion percentage (72.7) and is the Hoosiers career leader in completion percentage (67.4). ... Hoosiers running backs coach Mike Hart still is the Wolverines career rushing leader (5,040 yards).