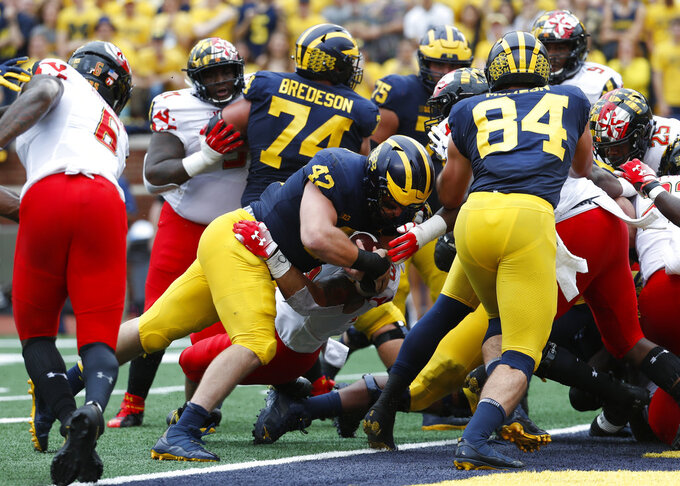 Michigan fullback Ben Mason (42) scores on a one-yard touchdown run against Maryland in the first half of an NCAA football game in Ann Arbor, Mich., Saturday, Oct. 6, 2018. (AP Photo/Paul Sancya) 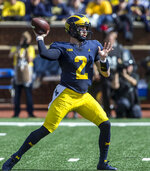 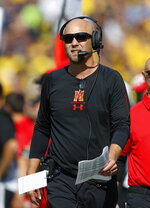 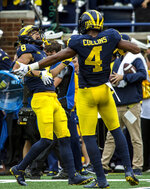 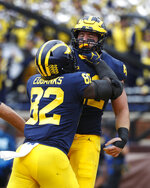 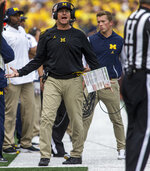 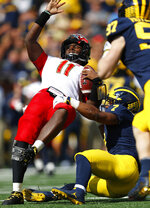 ANN ARBOR, Mich. (AP) — Shea Patterson took a shotgun snap and spun to his left, leaving a blitzing linebacker grabbing for air to extend a play that ended with the second of his three touchdown passes.

Patterson had a season-high 282 yards passing thanks in part to ability to throw on the run to help No. 15 Michigan brush off a sloppy start and beat Maryland 42-21 on Saturday.

"When he has to escape, he's got a real knack," coach Jim Harbaugh said.

After a weather delay of a little more than an hour, the Wolverines (5-1, 3-0 Big Ten) fell behind late in the first quarter and didn't take the lead again until midway through the second quarter. They scored 24 straight points to take control and added another TD and 2-point conversion with 6:37 remaining to seal their fifth straight victory.

The Terrapins (3-2, 1-1) went ahead on Ty Johnson's 98-yard kickoff return with 1:10 left in the first half, but they didn't score again until early in the fourth quarter.

Patterson completed 19 of 27 passes and had one interception, a pass that went off tight end Zach Gentry's hands.

The Ole Miss transfer often had a lot of time to throw from the pocket. When defenders charged at Patterson, mobility helped him make moves to avoid getting sacked and gave his teammates time to get open.

Michigan's Karan Higdon, who ran for 103 yards, said Patterson has showed off his agility while working out with the team's running backs.

"It's amazing to pay with someone like him," Higdon said. "He can pick his feet up and put them down."

"We tried to keep him in the pocket, but a good quarterback made good plays," Maryland defensive back Antoine Brooks said.

While he was drawing praise for his TD pass to Peoples-Jones, which was set up by him spinning to his left, the quarterback deflected credit.

"He did a heck of a job of getting open for me and the receivers blocking downfield really made that happen, too," Patterson said.

Maryland: Penalties are preventing the Terrapins from approaching their potential. They were flagged 12 times for 107 yards and two players, Rayshad Lewis and Tre Watson , were ejected for targeting. Maryland entered the game averaging 9.25 penalties, ranking No. 123 out of 129 teams at the highest level of college football.

"Again, the penalties and the miscommunications and those things fall back on me," interim coach Matt Canada said. "We've got to find a way to get them fixed in critical times against good teams. I take the blame for that. We've got to figure it out and we will figure it out."

Michigan: Slow starts have been a problem for more than half of the games this season. The Wolverines trailed Northwestern 17-0 last were and were tied with SMU 7-all late in second before rallying to win both teams. They fell behind 14-0 against Notre Dame and loss 24-17. Michigan may have a tough time coming back to beat its next three opponents: No. 16 Wisconsin, No. 20 Michigan State and No. 11 Penn State.

The Wolverines will likely be around the same spot in the rankings, but they have chances to move up with three straight tests.

Michigan: DE Rashan Gary was held out of the game with a shoulder ailment, which Harbaugh said is not a long-term injury. Harbaugh did not have an update on defensive linemen Michael Dwumfour, who was carted off the field with what looked like a right leg injury, and Carlo Kemp, who limped off the field. Running back Chris Evans did not play due to an undisclosed injury after practicing twice during the week and warming up before the game.

Maryland: Johnson, who ran for 3 yards on five carries, limped off the field in the fourth quarter.

MAN ON THE MOVE

Michigan fullback Ben Mason is known for scoring, as he did for the fifth time this season, and his blocking. He put his leaping skills on display, hurdling Maryland defensive back Darnell Savage .

"Now that, I didn't see coming," Higdon said with a grin.

Maryland: Hosts Rutgers with Lewis and Watson sitting out the first half after being ejected for targeting.

Michigan: Hosts the Badgers for the start of a three-game stretch that may prove to be pivotal.