No. 15 Texas visits Texas Tech, each looking to end skid 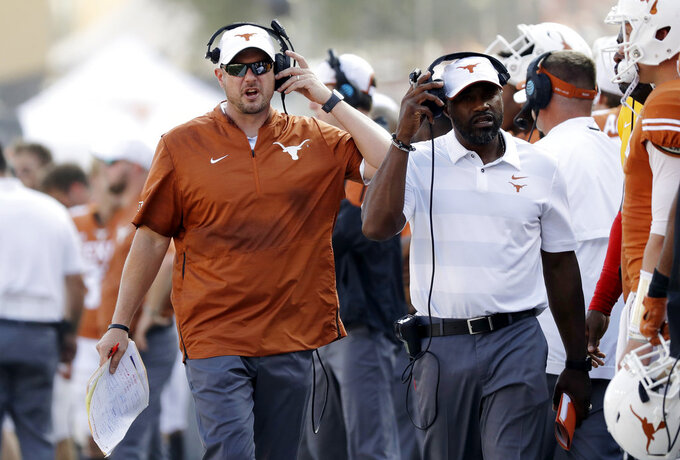 FILE - In this Oct. 13, 2018, file photo, Texas head coach Tom Herman during the second half of an NCAA college football game against Baylor in Austin, Texas. Texas faces Texas Tech on Saturday, and now most likely has to win its last three games and get some help to get into the Big 12 championship game. (AP Photo/Eric Gay, File)

LUBBOCK, Texas (AP) — No. 15 Texas has gone from Big 12 leader and College Football Playoff contender to conference chaser after consecutive losses by a combined four points.

Texas Tech has also lost its last two games, and their freshman quarterback took another hard shot last weekend. But the Red Raiders (5-4, 3-3 Big 12) can get bowl eligible with a win Saturday night over the Longhorns, just like they did last year in a regular-season finale last November that most likely saved coach Kliff Kingsbury's job. This game is also the final home game for Tech's seniors.

"You want them to have that moment, that memory," said Kingsbury, the former Tech quarterback in his sixth season as coach. "Three of those guys have been here every day I've been here. We have a lot of fifth-year seniors that have been through some ups and downs, and going through a lot to get to where they are at."

It is another primetime game in Lubbock, just like last week when Tech lost 51-46 to No. 6 Oklahoma. Freshman quarterback Alan Bowman, one of the nation's top passers, sustained a partially collapsed lung for the second time this season. He was hospitalized for four nights, and dual-treat Jett Duffey is expected to get his second start as Tech looks to get consecutive wins over Texas for the first time in 20 years.

Texas (6-3, 4-2, No. 19 CFP) likely has to win its last three games and get some help to get into the Big 12 championship game. The Longhorns are coming off a 42-41 loss to West Virginia, when Will Grier ran for a 2-point conversion in the final minute. The Mountaineers had more than 500 total yards, like Oklahoma State a week earlier in a 38-35 win.

"Playing a bit tentative. I think for whatever reason we haven't cut it loose at times," coach Tom Herman said of the Texas defense. "That's on us to figure out why. Maybe it's an uncertainty. Yeah, just playing tentative at times."

It doesn't help that Texas is banged up on defense. Senior defensive end Breckyn Hager (dislocated elbow) was hurt last week but was able to return to practice this week and could play Saturday. Senior cornerback Davante Davis (neck) also could return. Junior safety Brandon Jones (ankle) is questionable to play while Hager's backup, Marquez Bimage is out with a shoulder injury.

Penalizing West Virginia players for taunting for flashing downward "Hook'em Horns" hand signals raised new questions over whether the Longhorns get special treatment. Kingsbury this week told his players not to risk it and has issued similar instructions in the past. Texas players call it disrespectful and things could get chippy if a Red Raiders player does it in the heat of the moment. The Red Raiders were penalized for it in Tech's win in Austin last year.

"It bothers us a lot because we take pride in what we do and that logo," Texas wide receiver Lil'Jordan Humphrey said.

While Texas Tech has one of the nation's top passing games and leads the Big 12 with 376 yards a game, the Red Raiders' 25 rushing touchdowns are second in the league behind Oklahoma's 26.

"The quarterback and receivers get a lot of the publicity, if you will," Herman said. "You better be able to stop the run or you're going to bleed a slow death. They do it well enough to make you have to defend it."

Despite the two-game losing streak, Texas quarterback Sam Ehlinger keeps getting better. He had one of his best career games last week with 354 yards passing and three touchdowns and ran for another score. He leads Texas with nine rushing touchdowns. His long TD pass to Devin Duvernay gave Texas the lead with less than 3 minutes left. Ehlinger hasn't thrown an interception in since the first game, but he had a bad one late against Texas Tech last season that set up the Red Raiders' winning touchdown.

Red Raiders defensive back John Bonney played 37 for Texas the past three seasons before going to Texas Tech as a graduate transfer in August.

"John's a graduate of the University of Texas and gave us four years of his blood, sweat and tears and we're very thankful for that," Herman said.