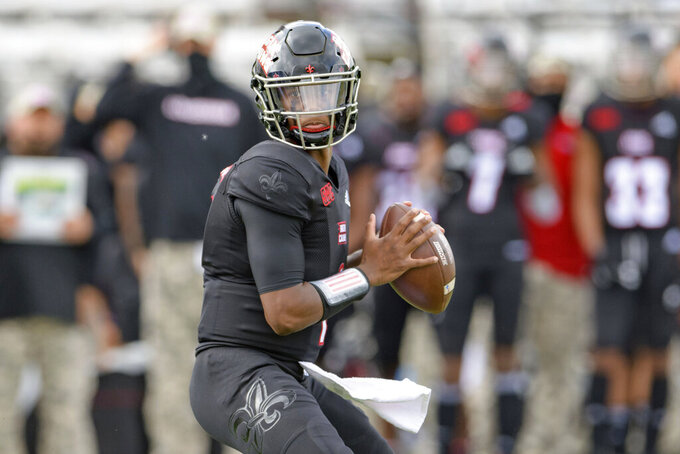 LAFAYETTE, La. (AP) — Louisiana-Lafayette coach Billy Napier enjoyed seeing the Ragin' Cajuns dispense with the late-game drama that has defined their season and take total control of a high-stakes game.

Levi Lewis passed for 252 yards and three touchdowns, Louisiana-Lafayette gained 254 yards on the ground and the No. 25 Ragin' Cajuns clinched a third straight Sun Belt Conference West Division title with a 38-10 victory over South Alabama on Saturday.

“We had an edge about us today," Napier said. “What I'm excited about is not necessarily winning the West, but we kind of rose to the challenge and were ready to play and put it together.”

Louisiana-Lafayette’s defense came in tied atop the Sun Belt in interceptions with 10 and safety Percy Butler added another on South Alabama’s opening drive.

The Cajuns (7-1, 5-1) quickly capitalized with Lewis’ TD pass to Jalen Williams less than five minutes into the game and ULL led the rest of the way.

Lewis' second touchdown tosses went for 3 yards to Errol Rogers. He also hit running back Trey Ragas for a 25-yard score on a fourth-down conversion, with Ragas narrowly staying inside the left sideline to put the game away early in the fourth quarter.

“We finally started fast this weekend," Ragas said, adding that knowing a victory would clinch the West “played a big part" in the focus and intensity the Cajuns were able to sustain from start to finish.

“This game could have went south quick, so we knew if we wanted to get to the championship we had to win this game. This was the only team that could stop us from that goal,” he said.

Chris Smith and Elijah Mitchell each had touchdowns rushing for Louisiana-Lafayette, which has won four straight since its only loss on a last-second field goal to No. 15 Coastal Carolina.

“I’m very disappointed," South Alabama coach Steve Campbell said. "We were playing for first place in the division and I really thought we would play better.

“I don’t know why we didn’t play well today,” Campbell added. "Give credit to Louisiana. They have a good football team.”

The Jaguars got as close as 21-10 on Kawaan Baker's touchdown catch in the second quarter, but Mitchell's 5-yard touchdown run made it 28-10 shortly before halftime.

The Cajuns increasingly took command throughout the second half, with both teams pulling starters in the middle of the fourth quarter.

“Giving up 38 points is not acceptable," Jaguars linebacker Nick Mobley said. "We made some plays, but we didn’t make enough of them.”

“Coach pushed us a little but harder this week and it really helped us out," said Smith, whose highlights included a 47-yard run that set up Mitchell's TD. “It got the (offensive) line moving faster.”

Ragas also noted that he thought the offensive line “got a good push this week.”

South Alabama: While the Jaguars entered the game still in contention in the Sun Belt West, they've hit a rough patch against both of the Sun Belt's ranked teams. South Alabama visited ULL after falling 23-6 at Coastal Carolina a week earlier.

Louisiana-Lafayette: With strong performances on both sides of the ball, the Ragin' Cajuns outgained South Alabama 506-268 in total yards en route to their most lopsided victory this season. The Cajuns now have three games to continue to build momentum before they'll appear in the conference championship game on Dec. 19 at a site and against an opponent yet to be determined.

The Ragin' Cajuns made their case to remain in the AP Top 25 Poll, if not move up with one of their more comfortable victories of the season.

Louisiana-Lafayette: Concludes its home schedule with non-conference game against Central Arkansas on Saturday