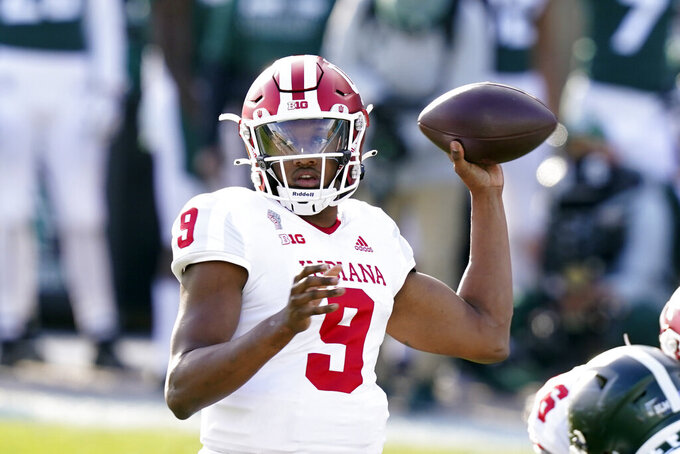 Things to watch during the fifth week of play in the Big Ten Conference:

It would be no exaggeration to call this the Hoosiers' biggest game in over 50 years. Indiana hasn't been ranked this high since 1967 and hasn't been involved in a top-10 matchup since the 1968 Rose Bowl against Southern California. Indiana hasn't beaten Ohio State since 1988 and has come no closer than 21 points in the last four meetings. The Buckeyes are three-touchdown favorites at the Horseshoe and itching to play after having their game against Maryland canceled last week.

Wisconsin offense vs. Northwestern defense. The Badgers are averaging 47 points and 449 yards through its first two games and redshirt freshman Graham Mertz is the Big Ten's highest-rated quarterback with seven touchdowns against no interceptions. Northwestern's defense, anchored by a fabulous linebacker corps, is allowing 14 points and 301 yards per game.

Rutgers is a 10-point underdog at home to Michigan. The Scarlet Knights have been outscored 120-7 in their last two games against Michigan in Piscataway, New Jersey. But they're improving since the return of coach Greg Schiano and Michigan is struggling, having lost three of four for its worst start since 1967.

Illinois linebacker Jake Hansen must be at the top of his game, and get lots of help from his defensive teammates, if the Illini are going to steal a road win against Nebraska. The Huskers have run up huge offensive numbers in the last two meetings. Hansen had 15 tackles in a road win against Rutgers last week. He made 12 stops, forced two fumbles and recovered one against Nebraska last year.