Notre Dame-Army, a football rivalry unmatched in the 1940s 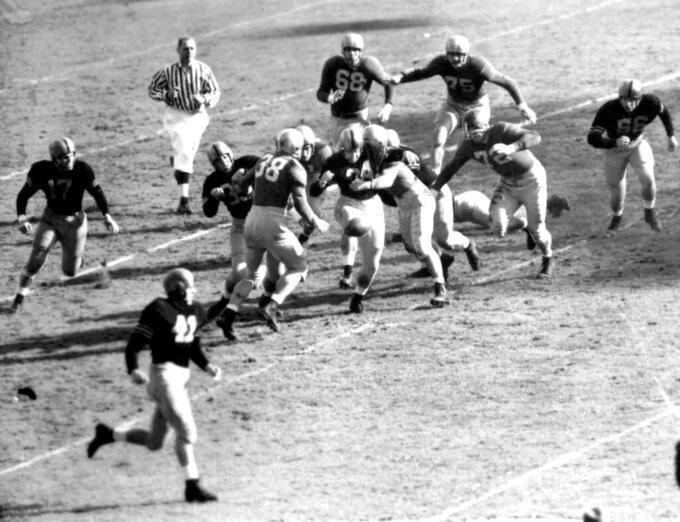 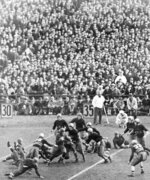 WEST POINT, N.Y. (AP) — When Army coach Jeff Monken kicks back in his office chair, he can stare out the massive side window at Michie Stadium and the sign that hangs above Blaik Field on the home side — "National Champions 1944, 1945, 1946" — and imagine Mr. Inside and Mr. Outside running rampant.

"I think that's awesome," said Monken, the latest Army coach to use films of the program's glory days as motivation for today's players. "It's a great thing to be proud of."

Army briefly became king of the hill in the decade of the 1940s after Earl "Red" Blaik was hired as head coach in 1941, and Notre Dame became its foil in the biggest rivalry in the nation. A series that began in 1913 had been dominated by the Irish — 20 wins with three ties in the first 26 games — and reached its zenith in intensity in the 1940s.

Notre Dame defeated Army 13-0 and 26-0 in Blaik's second and third seasons before the Black Knights struck with a vengeance. Felix "Doc" Blanchard, aka Mr. Inside, and Glenn Davis, aka Mr. Outside, led the charge. Army intercepted eight passes and trounced the Irish 59-0 at Yankee Stadium.

It still ranks as the worst defeat in Irish history and remains a source of pride for the Long Gray Line.

"Talking to players who actually competed in those games, they were bitter, bitter rivals," said Army executive athletic director Bob Beretta, who's worked at West Point for three decades. "They were challenging for the place of the most elite program in the country. "

The Associated Press college football poll was created in 1936 to try to answer the simplest yet most divisive question in sports: Who's better? The poll helped give a regional sport more of a national scope and helped define the Army-Notre Dame rivalry.

"It (the poll) absolutely was a factor. I think it was a happening," Beretta said. "All the eyes of the college football world were on New York City and Yankee Stadium for Army-Notre Dame. That was probably going to be the game to determine the national champion. It wasn't a game. It was an event. It was must-see football."

Notre Dame was ranked No. 1 three times from 1936-39 and another 30 times in the 1940s, when the Irish won four of their eight national championships. Army was not ranked from 1936-39 but earned the top ranking 22 times in its special decade under Blaik, which included five unbeaten seasons.

Army followed that 1944 trouncing with a 48-0 victory over Notre Dame the next year as the Black Knights hit their zenith under Blanchard and Davis, who each won the Heisman Trophy.

"We were the top dog at the time. It was very important to continue that status," said 92-year-old Arnold Tucker, standout quarterback on those Army teams. "We wanted a third."

The rivalry would culminate in one of the great games of the 20th century — a 0-0 tie in 1946. Both were unbeaten and untied coming in.

"That was the game of the century. Always intense," said 88-year-old Bill Gompers, a halfback on that Notre Dame team who nearly scored, getting run out of bounds at the Army goal line on fourth down by Blanchard. "To play in a game like that was out of this world for each of us."

"The big thing was the rivalry. That was the biggest because of the national championship," Gompers said.

Michigan appeared in 98.86 percent of all polls taken.

How intense was the Army-Notre Dame rivalry? The series entered a 10-year hiatus after the 1947 game at Notre Dame when the Irish won easily 27-7. Blaik and the Army brass thought the rivalry had become too heated and the Irish, not Navy, had become Army's biggest rival.

The AP poll didn't necessarily make the games between the teams bigger, but it helped place more tangible stakes on the big games — the No. 1 ranking and national title.