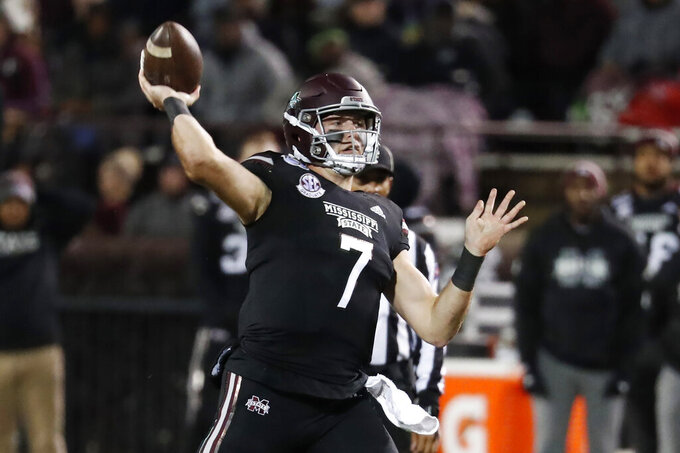 STARKVILLE, Miss. (AP) — Mississippi State got a rare late-season break from SEC play on Saturday and took advantage of the opportunity.

Tommy Stevens had two touchdown passes and ran for another as Mississippi State defeated Abilene Christian 45-7 on Saturday.

Stevens had 165 yards passing and 88 yards rushing in the Bulldogs' final nonconference outing of the season. Kylin Hill added 153 yards rushing and had 88 yards receiving and a touchdown for Mississippi State (5-6).

The Bulldogs rolled up 577 yards of offense and had 372 yards rushing.

"We did some good things in the run game and our defense held them to seven points," said Mississippi State coach Joe Moorhead. "But at the end of the day I was pleased with the win and we're ready to move forward with Egg Bowl week. We needed to execute in all three phases and have a sense of urgency and we saw that at times."

Hill averaged 9.6 yards per carry against Abilene Christian and his 88-yard touchdown reception was the longest of his career. For the season the junior tailback has now rushed for 1,325 yards, which leads the SEC.

"I've changed my running style and you have to change it up when they stack the box," said Hill. "I can't make too many moves and I have to be decisive."

Luke Anthony was 25-of-38 passing for 255 yards with one touchdown and one interception for Abilene Christian.

Mississippi State jumped out to a 21-0 lead in the opening 20 minutes thanks to a pair of Stevens' touchdowns passes. The Bulldogs got on the board first with a 4-yard scoring run by Nick Gibson. However, the Bulldogs' offense sputtered for most of the first quarter and Mississippi State punted on the first two offensive series.

Stevens had an 11-yard scoring toss to Deddrick Thomas and an 88-yard touchdown pass to Hill in the second quarter.

"I was seeing red because we were not executing at a high level," said Moorhead. "There were some things on those first two drive where we need to play with more precision. We needed to block better and find the guy that was open and catch it. We started that in the second half with more tempo and it was more of a matter of execution than anything.”

In the second half, Mississippi State quarterback Garrett Shrader ran for a touchdown and threw for another. The freshman was 3-of-3 passing for 40 yards and added 65 yards rushing.

Abilene Christian's lone touchdown of the game came on a 4-yard touchdown pass from Anthony to Tracy James in the second quarter. The Wildcats finished with 282 yards of offense and had just 27 yards rushing on 28 attempts. Anthony also threw two interceptions and was sacked four times.

Abilene Christian: The Wildcats finished up their third season under head coach Adam Dorrell. After a 2-9 season in Dorrell's debut season in 2017, Abilene Christian has won 11 games since the start of the 2018 season.

Mississippi State: It was the Bulldogs' final tune-up for the Egg Bowl and there's a lot riding on the Thanksgiving rivalry matchup. The Bulldogs need a win to gain bowl eligibility and to get a postseason invite for the 10th straight season.

Normally, Mondays are considered 'off days' for Mississippi State during game week. But that won't be the case leading up to Mississippi State's regular-season finale. The Bulldogs return to action in five days and host Ole Miss on Thursday.

Mississippi State improved its record against Southland Conference foes to 8-0 all-time in school history. The Bulldogs have won 18 straight games against FCS opponents. Mississippi State's last loss to an FCS school came in 2004 via a 9-7 setback to Maine.

This season has been filled with suspensions for Mississippi State, largely stemming from academic violations that included 10 Mississippi State players. That group, which includes defensive starters Willie Gay, Lee Autry and Marcus Murphy, had to miss eight games this season and the final one came Saturday against Abilene Christian. All those players are expected to play next week against Ole Miss in the Egg Bowl.

Abilene Christian: The Wildcats concluded their regular season Saturday at Mississippi State and finished with a 5-7 record. Abilene Christian posted a 4-5 record in the Southland Conference.