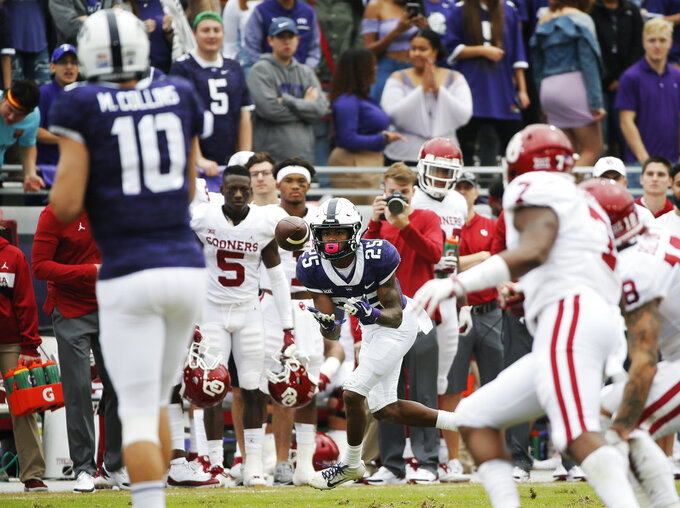 FORT WORTH, Texas (AP) — TCU receiver and standout returner KaVontae Turpin was suspended from the team Monday after his arrest over the weekend on an assault charge for an alleged altercation with his girlfriend.

According to an arrest affidavit, Turpin was charged with assault causing bodily injury to a family member after Fort Worth police responded to a domestic disturbance call at an off-campus apartment complex late Saturday.

"This university, we've also been a very strong advocate toward making sure we do the right thing," Patterson said Monday.

Turpin's arrest came hours after he had a 99-yard kickoff return for his school-record sixth career special teams touchdown and a 41-yard TD catch in TCU's 52-27 home loss to Oklahoma on Saturday. He is second in the Big 12 in all-purpose yards with 132.7 yards per game.

In the affidavit, a 22-year-old woman who said she has been in a relationship with Turpin for five years told police he "dragged her across the parking lot" and that "he slammed her to the ground," causing her pain. She eventually got away and knocked on a neighbor's door, asking them to call police.

The woman said Turpin was angry because he believed that she had sent photos of herself to other people.

Police said a witness who lived at the complex said he and two friends heard screaming in the parking lot and then saw Turpin "manhandle" the woman "by grabbing her from behind with one arm across her neck, her feet dragging as she kicked and yelled at him," according to the affidavit.

The arresting officer said in the affidavit that Turpin refused to talk to him about what occurred at the complex and was placed in the back of a patrol car. There was no immediate information on an attorney for Turpin, who could face up to a year in prison and a $4,000 fine if convicted of the Class A misdemeanor.

The university, not the athletic department, released a statement that the school was aware that one of its students had been arrested for a reported domestic situation.

"The university takes these types of reports very seriously and is continuing to gather information to determine next steps," the statement read. "TCU expects its students to behave in an ethical manner, abide by campus policies and adhere to state and federal law. The student also may face a charge of violating the University Code of Student Conduct, the results of which are independent and separate from any legal charges."