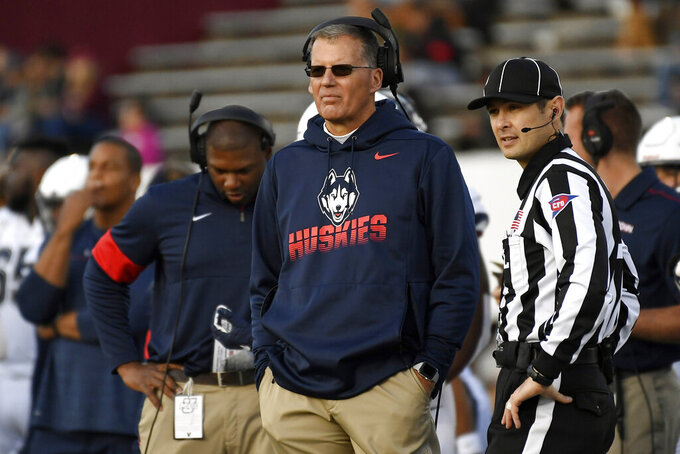 FILE - In this Oct. 26, 2019, file photo, Connecticut head coach Randy Edsall during the first half of an NCAA college football game in Amherst, Mass. UConn has canceled its 2020-2021 football season, becoming the first FBS program to suspend football because of the coronavirus pandemic. (AP Photo/Jessica Hill, File)

The terms of both deals remain the same, the school said.

Both contracts call for increases each year, which will be based in large part on bonuses and performance incentives.

The 48-year-old Hurley is in his third season at UConn. He has led the Huskies to a 48-35 record, including 13-6 this season, their first in the Big East after seven years in the American Athletic Conference.

“During Dan’s introductory press conference almost three years ago, I said that he is the absolute right fit for UConn,” David Benedict, the school's athletic director, said. “The success of the team this year, the culture he has instilled in his program, and the excitement the Huskies have generated throughout UConn Nation make it abundantly clear that Coach Hurley is the right leader of our men’s basketball program for many years to come.”

Edsall, 62, is 6-30 since returning in 2016 for his second coaching stint at Connecticut. The Huskies did not play in 2020 because of concerns stemming from the COVID-19 pandemic.

“When I hired Randy, he and I knew that rebuilding our football program was a long-term project that would require a great deal of patience,” Benedict said. “My confidence in his ability to revive UConn football remains strong, and I look forward to watching a committed group of young men compete on the gridiron this fall.”