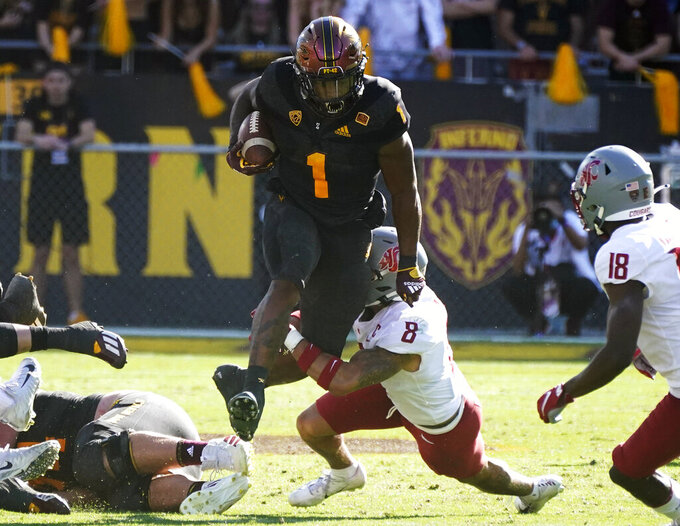 TEMPE, Ariz. (AP) — Southern California lost its coach after two games, dropped three games in the past five. Arizona State seems to have lost it focus, giving up 56 straight points over the span of two ugly losses.

Somehow, the Trojans and Sun Devils still have a shot at winning the Pac-12 South.

But now the margin for error has become paper thin, turning Saturday's game in the desert into an elimination game of sorts.

"It’s about the process and where it starts,” Arizona State coach Herm Edwards said. “Every week you have an opportunity to win a game. The joy you feel, the accomplishment you feel as a football team to win. And we haven’t felt that.”

The Sun Devils still have a little time. They're a game behind Utah, though the Utes hold the tiebreaker after the Oct. 16 win.

They lost their coach when Clay Helton was fired after the second game and had a stretch of three losses in four games before beating Arizona last week. USC also lost star wideout Drake London to a season-ending ankle injury but is just 1 1/2 games behind Utah, which also holds a tiebreaker over the Trojans.

"The morale is high because there's a lot of opportunities," USC interim coach Donte Williams said.

“We’ll continue to assess that as it gets closer, closer to game time,” Williams said. “Arizona State provides certain issues that we’ve got to make sure we’re able to handle.”

Dart made his college debut when Slovis injured his neck against Washington State on Sept. 18, but got injured himself, suffering a knee injury that required surgery. Dart returned last week against Arizona and was under center in the the fourth quarter of a close game.

Arizona State should get back one of its best offensive players with the expected return of running back Rachaad White.

White didn't play against Washington State due to a right leg injury and the Sun Devils were never able to get anything going on the ground without him, finishing with 131 yards rushing.

White, who leads Arizona State with 483 yards and nine touchdowns rushing, returned to practice this week.

USC will be without one of the nation's best receivers for the rest of the season.

London suffered a broken ankle in the first half against Arizona last week, robbing the Trojans of their biggest weapon. London set an FBS record with 79 catches in his team’s first seven games and finished with 88 catches for 1,084 yards and seven TDs.

“A big impact player and not having him is kind of a loss, but we have a lot of people that are next up to do a job,” USC linebacker Drake Jackson said.