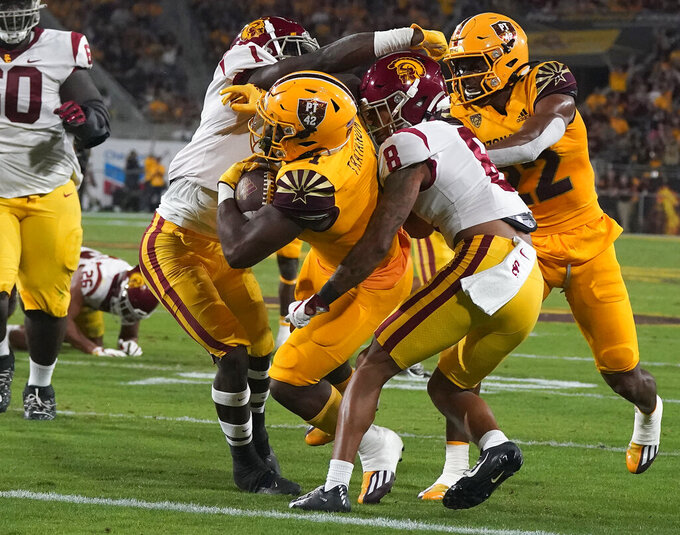 Arizona State running back DeaMonte Trayanum (1) bulls his way into the end zone against Southern California's Greg Johnson (1) and Chris Steele (8) during the first half of an NCAA college football game Saturday, Nov. 6, 2021, in Tempe, Ariz. (AP Photo/Darryl Webb)

TEMPE, Ariz. (AP) — A fox ran onto the field at Sun Devil Stadium, leaped over a wall and scampered up the steps before hiding under a seat. It returned about a minute later around the 10-yard line, dodged a few workers and sprinted up a ramp out of sight.

Rachaad White made Southern California's defenders know how the workers felt with a foxy mix of power, speed and elusiveness.

White became the sixth Arizona State player to run for 200 yards in a Pac-10/12 game, racking up 202 yards and three touchdowns Saturday night to help the Sun Devils bounce back from two ugly losses with 31-16 win over USC.

And the Sun Devils (6-2, 4-1 Pac-12) needed White after lackluster losses to Utah and Washington State.

Quarterback Jayden Daniels was mostly ineffective, throwing for 145 yards with two interceptions — both by Xavion Alford. White made up for it after missing last week's game with a right leg injury, racing off on two long touchdowns and a game-sealing short one in the closing minutes.

USC (4-5, 3-3) alternated between Kedon Slovis and Jaxson Dart at quarterback — and neither could seem to get into a rhythm.

Dart scored on a 9-yard run, but the Trojans had to settle for three Parker Lewis field goals when they had a chance to build a lead.

“When we get our chances, we have to capitalize on our opportunities,” said USC receiver Tahj Washington, who had nine catches for 78 yards. “Those guys made some plays and they studied pretty good.”

The Trojans and Sun Devils have gone through a bit of adversity this season, yet still were in the mix for the Pac-12 South title.

USC coach Clay Helton was fired after two games, the Trojans gave up 40 points in three homes losses and lost star wideout Drake London for the season to a broken ankle last week against Arizona.

The Sun Devils were coming off consecutive lackluster losses, allowing Utah to score the final 28 points and Washington State to score the first 28 last week.

A win over Stanford on Friday night put Utah in the pole position for the South, essentially making USC-Arizona State an elimination game.

Arizona State appeared ready to give it away.

The Sun Devils spoiled good drives with turnovers and kept USC's drives alive with untimely penalties. Their defense was sharp when it needed to be, though, holding USC to 65 first-half yards.

In the first quarter, DeaMonte Trayanum waited behind his blockers for a hole to open, then burst through for a 14-yard touchdown — not long after the fox ran onto the field and briefly delayed the game.

White broke numerous tackles and carried several defenders on a 26-yard catch-and-run, then burst up the right sideline for a 47-yard touchdown run to put Arizona State up 14-10 at halftime.

“When you can't control the line of scrimmage and they have two guys who can run the ball, you're going to have issues,” USC interim coach Donte Williams said. “And we had issues.”

USC continued its disjointed season with a sputtering offense and by giving up big plays at key times on defense.

Arizona State needed a bounce-back win and got it behind White's big game.

Williams has been alternating quarterbacks in an attempt to find the best fit to lead the offense.

He's still searching after an uneven combo performance by Slovis and Dart.

“We're going to do what we've got to do to win a football game,” Williams said. “It's not like either one lit it up tonight to say one of them is clear cut in front of the other. They both made mistakes like we all made mistakes.”

USC plays at California on Saturday.

Arizona State is at Washington on Saturday.