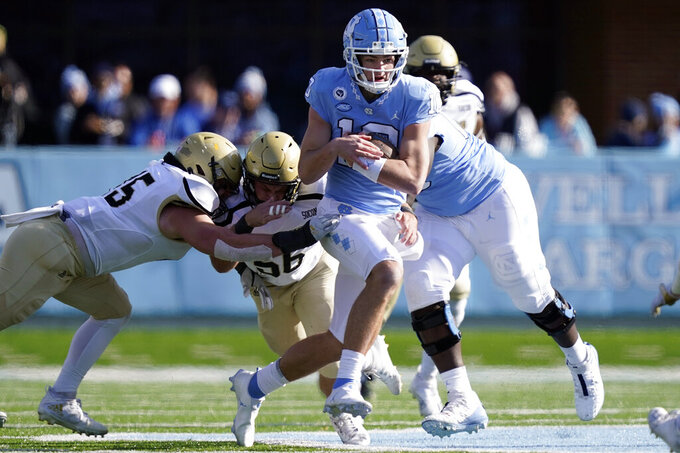 Howell, who was a game-time decision, missed the first game of his career due to an upper-body injury suffered against No. 20 Pittsburgh last week. Jacolby Criswell started for the Tar Heels and threw for 125 yards, adding 66 yards and a touchdown on the ground. Freshman Drake Maye took over after halftime and finished with 89 yards.

The Tar Heels (6-5, 3-4 ACC) never trailed in a Senior Day win where they held the Terriers (1-10, 0-8 Southern Conference) to 242 total yards and rode a ground game that scored three times.

Saturday might have marked a home finale for Howell, a junior and top NFL prospect who participated in the team’s Senior Day festivities.

UNC: Howell started North Carolina’s 2019 season opener as a true freshman and, until Saturday, had played every game since. In that time he’s set numerous UNC career records, including passing yardage and passing touchdowns.

Against Wofford, the Tar Heels got their first extended look at how next season might look without him. Both Criswell and Maye were efficient, combining to complete 18 of 28 passing attempts and each leading multiple touchdown drives.

Wofford: The Terriers started the season with a 24-22 win over Elon and have dropped 10 straight games since.

The Tar Heels averaged 7.8 yards per carry on the ground and saw three players — Brooks, Chandler and Criswell — finish with at least 60 yards. Brooks’ previous high for rushing yards in a game this season was 10 against Georgia State.

“I was really proud of British Brooks, him going in and gaining 80-plus yards on his Senior Day,” coach Mack Brown said. “And he’s the ultimate story of success, coming in as a walk-on.”

An option team, the Terriers posted 209 rushing yards of their own, a product of their only attempting 10 passes with Derrick under center. Ryan Ingram led the running back tandem with 50.

The brother of former UNC basketball star Luke Maye, he finished with 127 total yards and a handful of highlight plays, including an 18-yard scramble to set up a first down, the day’s only passing touchdown — a play action toss to Kamari Morales — and a 46-yard completion to put UNC in the red zone.

Brown said that both quarterbacks looked “really, really good” and was hesitant to make any proclamations about the position battle next season.

“We’ve got a perfect setup for a quarterback controversy coming up,” he said.

UNC: The Tar Heels close the regular season Friday in Raleigh against No. 25 N.C. State.

Wofford: Saturday marked the end of a one-win season for the Terriers.