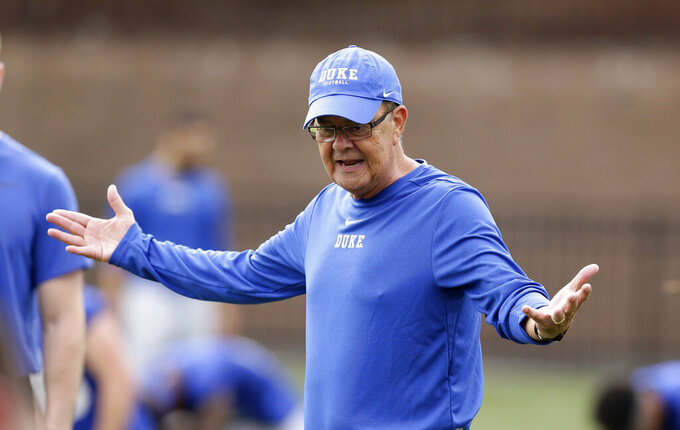 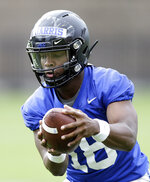 David Cutcliffe has had to replace plenty of quarterbacks after they were drafted in the first round.

Just not at Duke.

But when Daniel Jones left early and — somewhat surprisingly — was taken sixth overall by the New York Giants, it became clear that one of the keys to success in Cutcliffe's 12th season at the school would be how Quentin Harris adjusts to his new role as the full-time starter.

Cutcliffe — who previously groomed Heath Shuler and the Manning brothers into first-round draft picks — has full confidence in Harris, calling the fifth-year senior who won both of his starts last year "plain and simple brilliant."

"One of the things that I've been fortunate to do in my career is have to replace first-round draft choice quarterbacks. It's not an easy task," Cutcliffe said. "We have to realize it's all about what they can function within and what they do well. ... I could not be more excited about having a fifth-year senior to step up and step in."

That's largely because Harris has done it before. When Jones broke his collarbone in Week 2 last season at Northwestern, Harris came in and polished off that victory, then led the Blue Devils to wins over Baylor and North Carolina Central while guiding them to a No. 22 national ranking.

Jones capped his college career by throwing for 423 yards and five touchdowns in a 56-27 victory over Temple in the Independence Bowl — Duke's three straight bowl wins over a four-year period. He's just the second Duke player, and the first skill player, taken in the first round since 1987.

Now it's Harris' turn to keep it going. He brings a bit more explosive mobility to the position, though Jones did have two 100-yard rushing games during his three seasons as the starter. Harris completed 50% of his passes with seven touchdowns to one interception.

"Hopefully I've earned the respect of my teammates over the last four years, kind of in the role that I've occupied," Harris said. "But I think hopefully I've taken the reins, taken a more vocal leadership role. As I started to play more in a supplemental role the last couple seasons, took more leadership of the team, a more vocal standpoint."

Some other things to know about the 2019 Duke Blue Devils:

So much for Harris easing into the full-time job: The Blue Devils open with a neutral-site game against Alabama. "Alabama's program is as elite as there has been in college football," said Cutcliffe, an Alabama graduate. "I know that history." Duke also plays host to Notre Dame on Nov. 9, giving the Blue Devils two nonconference games against College Football Playoff teams from 2018.

The defense might have to lead the way until the offense finds its footing. The Blue Devils return eight starters on defense, and that's not counting CB Mark Gilbert, an all-Atlantic Coast Conference pick in 2017 who suffered a season-ending hip injury in the second game last season. "I'm more excited about this defense than any defense we've had in the 12 seasons," Cutcliffe said.

Those matchups with Alabama and Notre Dame will make headlines, but the key stretch could come in late September and early October with consecutive games at Virginia Tech and at home against Coastal Division champion Pittsburgh. The Blue Devils — who have a combined three wins against those two schools since they joined the ACC — might need to win both to reach six wins and earn a third straight bowl berth.

Duke opens Aug. 31 against Alabama in the Chick-fil-A Kickoff Game in Atlanta.