Aranda brings up `The Boss' as example for No. 17 Baylor 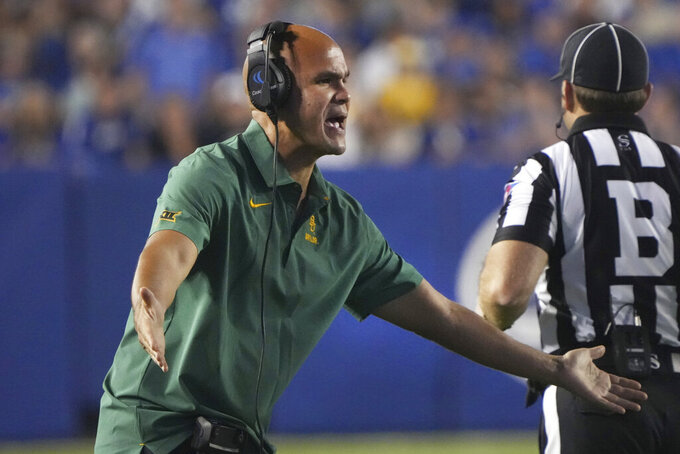 Baylor head coach Dave Aranda yells at an official in the first half, during an NCAA college football game against BYU, Saturday, Sept. 10, 2022, in Provo, Utah. (AP Photo/George Frey)

WACO, Texas (AP) — Baylor coach Dave Aranda used Bruce Springsteen's approach to his live performances as an example to his players about always having energy and great execution. He then had to tell the older teenagers and young 20-somethings who is “The Boss.”

Aranda wanted to remind the 17th-ranked Bears (1-1), who play their final non-conference game at home Saturday against Texas State (1-1), not to view things as just being routine. Whether that be the actual game, a midweek practice or off-field work.

“There was a quote that (Springsteen) had, about how he doesn’t see concerts as just a routine. He sees it as a renewal, and he talks about how he’s playing ‘Born to Run’ however many times," Aranda said. “Each time, it’s a new time because there’s someone bringing somebody for the first time that listened to him. ... And it’s like, you never know whose first time it is. You never know the impact that you make."

Baylor is coming off a double-overtime loss at future Big 12 foe BYU, a game in which the Bears had 14 penalties — after none when beating the Cougars at home last year. They also averaged only 2.9 yards on 52 rushing attempts, their most in Aranda's three seasons.

The Bears were unranked when they grinded out a 29-20 win at Texas Stat e in last year's season opener. Since becoming an FBS team in 2012, the Bobcats are 0-9 vs. Top 25 teams, and lost those games by an average margin of nearly 34 points.

Starting running back Taye McWilliams is questionable for Baylor after leaving the first half of the BYU game when he took a hard shot to his chest.

Craig Williams, the fifth-year junior nicknamed “Sqwirl” limited by injuries to eight games before this season, had a career-high 17 carries against BYU. He could be heavily involved in the running game with Qualan Jones this week.

“I’m never gonna turn down any carries,” Williams said. “I’m sure everybody in the room is ready to go out there.”

Baylor will play the first half without starting middle linebacker Dillon Doyle, who was penalized for targeting in the fourth quarter against BYU. The former Iowa transfer started Baylor's last 25 games.

That targeting call came when when BYU running back Lopini Katoa was hit in the open field when trying to catch a pass.

“Dillon, he’s kind of heartbroken about it," Aranda said. "It’s one of those things to where you slow it down, you can see him leave his feet, you could see the launch and all of it. ... It’s hard when a guy is up high and he’s coming down low."

Texas State cornerback Chris Mills will be on the sideline but won’t play after a scary collision with a receiver in the win over FIU last Saturday night. Mills was motionless on the field and taken off the field on a cart after players for both teams gathered for a prayer.

“Just thankfully, he’s all great," Bobcats coach Jake Spavital said. “You know, he wants to play, but I keep telling me we need to sit this one out.”

Spavital said Mills has gotten “great reports” from doctors and was with the team all week.

Calvin Hill has rushed for at least 100 yards in three of his last four games for Texas State, including a career-high 195 yards on 28 carries against FIU.

“Calvin started giving us a spark in that third, fourth quarter,” Spavital said of the 5-foot-8, 185-pound Hill, a fourth-year sophomore with 16 career starts. “He’s a pretty dynamic player in space.”

AFTER MIDNIGHT TO PRE-NOON

The Bears will kick off their non-conference finale just after 11 a.m. local time. It comes a week after their game in Utah that didn't end until after midnight — at 1:19 a.m. Texas time, specifically — and the team didn't get back to Waco until close to sunrise Sunday.

“I'm fine with whatever they give us," said safety Devin Neal, who leads the team with eight solo tackles. "I’m ready to work whenever, I kind of like to look at it that way.”