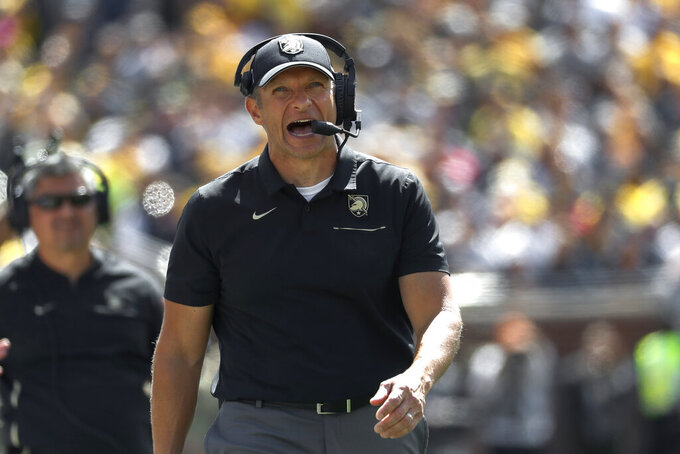 FILE - Army head coach Jeff Monken watches in the second half of an NCAA college football game against Michigan in Ann Arbor, Mich., Saturday, Sept. 7, 2019. Monken has his Black Knights back in the national rankings after an off year, but in this crazy season they suddenly have a forced bye week that actually might be a blessing in disguise. (AP Photo/Paul Sancya, File)

Army coach Jeff Monken has the Black Knights purring again, and all of a sudden the momentum built in two lopsided wins to start the season has been halted by the coronavirus.

After beating Louisiana-Monroe 37-7 on Saturday, the Black Knights were alerted that this Saturday's home game against No. 21 BYU had been postponed. That's a tough pill to swallow, especially for seniors in their last hurrah.

“With the way things are going right now, some games being canceled, it’s Week 3 and we’ve already had a game canceled.," Monken said Tuesday. “I anticipate that this won’t be the last time this happens during the season, so if it happens again you start counting on your hand how many opportunities you have.

"We don’t want to lose opportunities. We’ve got a healthy football team right now. I hope we’ll stay healthy through the whole year. That’s hard to do. While we were healthy we were just hoping to play. It’s disappointing not to play. Our guys want to play.”

Army averaged 388 yards rushing in outscoring Middle Tennessee State and Louisiana-Monro e 79-7 and dominating both sides of the ball. The triple option led by junior quarterback Christian Anderson has scored touchdowns on all six tries inside the red zone while holding the ball just over 36 minutes a game, thanks to an array of running backs led by senior tri-captain Sandon McCoy (4 TDs) and sophomore Jakobi Buchanan (139 yards rushing, 2 TDs). And then there's the defense, which has forced six turnovers (three fumble recoveries, three interceptions), and special teams have made an impact, too — a fake punt on fourth-and-10 succeeded and tilted a tight game Army's way against ULM.

One of the secrets to that success? The West Point bubble the team has lived in since arriving in June.

“It was very important," said senior linebacker Amadeo West, another captain who was limited by injuries to 13 games his first three seasons. "We’re very thankful we had our leadership here make arrangements and decisions that allowed us to be in this bubble and ultimately allowed us to stay healthy and stay away from the outside world. Ultimately, it was a blessing because we built our culture and we got to know each other and just build on the relationships we have on this team.”

“I think it’s real important," McCoy added. “We don’t have a choice. We cannot leave (campus). No one can leave. It just limits our point of contact to get COVID.”

“We’re used to having a little more freedom and being able to leave and stuff," West said. "But, obviously, we’re living in difficult times, so we understood that difficult times require difficult measures and we have to make personal sacrifices in order to gain the bigger achievement, and that’s to win as a team.

“We knew we were facing really good opponents going into both games. Coach Monken just emphasized focusing on us and fundamentals. Nothing extraordinary — just play team ball, and that’s what we did.”

The success on the field has the Black Knights ranked No. 22 this week in the AP Top 25.

“I honestly didn’t know we were ranked until today, to be honest," West said with a laugh Tuesday night after practice. "It just goes to show that’s not necessarily a priority in this program. We just want to focus on us, the relationships we have on this team, and focus on the opponent.”

Unfortunately, there is no opponent this week, but it's not for lack of trying. Army started calling schools immediately after learning of BYU's decision before the opening kickoff against ULM. But with a limited number of FBC and FCS teams available, Army contacted just over 20 schools and came up empty, even though the Black Knights were willing to travel to play.

If nothing arises, the Black Knights will have extra time to get their rooms spotless for the tough Saturday morning inspection and then prepare for a road game a week from Saturday against No. 13 Cincinnati.

As for still playing BYU, it remains anybody's guess.

“There’s certainly a lot of unknowns and a lot of possibilities," Monken said. "As we get into the weeks to come and look at the other games ... and the effects of what may happen with this virus and what we need to do with each open weekend that we have, I think we’ve kind of got to consider that.

“We would love to play that game (BYU). They’re a great team. It would be just a great opportunity for our program. If we can do it, then we’ll try to do it. But right now we’ve got our schedule set.”

By Emily Wagster Pettus 59 minutes ago
By Aaron Beard 2 hrs ago
By Ralph D. Russo 3 hrs ago
3 hrs ago
By Tim Reynolds 3 hrs ago