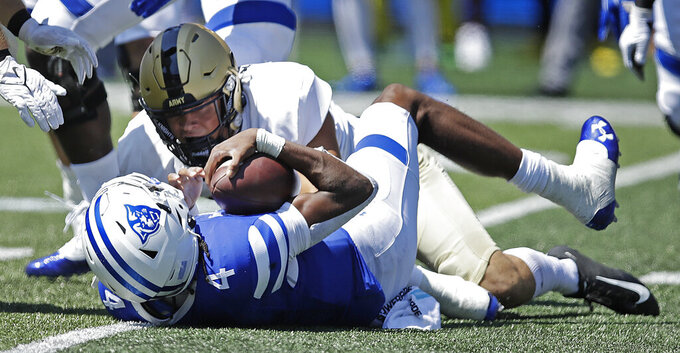 Line: Georgia State by 5 1/2, according to FanDuel Sportsbook.

Georgia State could set a program record for wins in a season and continue a tear that started in midseason. The Panthers have won six of seven games after a 1-4 start that included three blowout losses. Ball State is hoping to finish with a winning record and capture its second straight bowl win. The Cardinals had been 0-8-1 in bowl games before beating San Jose State in last season's Arizona Bowl.

Georgia State's top-10 rushing offense against the Ball State defense. The Panthers are averaging 224.5 yards on the ground, eighth-best nationally and the second-most in program history. Ball State's defense is giving up an average of 169.5 yards rushing per game, fifth in the Mid-American Conference.

Georgia State is the only FBS team to play four road games against Top 25 teams. ... It's only the third time Ball State has played in consecutive bowl games, joining the 2007-08 and 2012-13 teams. ... Georgia State was the first team Ball State's Mike Neu faced as head coach, a 31-21 Cardinals win on Sept. 2, 2016. ... The first seven Camellia Bowls were decided by a total of 32 points, with three of them decided on the final play and all seven coming down to the fourth quarter. ... The Panthers' super senior left guard Shamarious Gilmore has earned All-Sun Belt Conference honors five times, making the first team the past two seasons. This would be his 60th straight game.