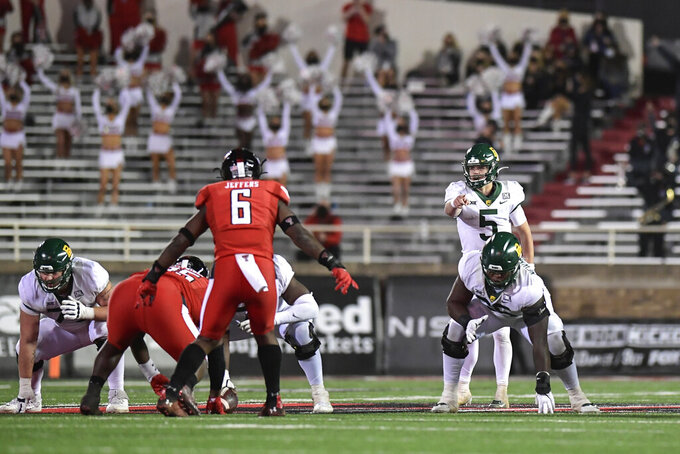 WACO, Texas (AP) — Baylor and Kansas State both could use a boost after some struggles and drastically different losses.

The Wildcats (4-4, 4-3 Big 12) are just ready to get back on the field for a chance to move past their 45-0 loss at Iowa State last week, their third loss in a row after starting 4-0 in conference play.

“That was a pretty embarrassing loss. That is just something that we have to put behind us," senior defensive back Kiondre Thomas said. "We have proven that we can beat anybody, but we can lose to anybody. ... We're really ready to get back out there. Extremely ready.”

K-State plays Saturday night at Baylor (1-5, 1-5), the first home game for the Bears since a loss to TCU on Halloween. That was their only game on the banks of the Brazos River since a season-opening win Sept. 26 over Kansas.

Baylor has lost consecutive road games after having two-touchdown leads in the second half. The Bears fell to Iowa State before a 24-23 loss at Texas Tech on a game-ending field goal that preceded their scheduled open date last weekend. Their five losses are by a combined 35 points, three by a touchdown or less and none by more than 11 points.

“We have to finish. I think there’s a few games we had to start faster. And so I think playing the four quarters is the common thread there,” Bears first-year coach Dave Aranda said. “I think we have gradually gotten better with that. We have to fully live that out here.”

True freshman quarterback Will Howard has started K-State's last five games since senior Skylar Thompson's season-ending shoulder injury. Howard was 3-of-9 passing for 32 yards with an interception against Iowa State, when junior Nick Ast (6 of 10 for 44 yards) also got some action. Coach Chris Klieman said Ast did some nice things and the Wildcats were still working both of them.

“It was a great learning experience for Will, especially after he got hit really good the one time and then had a couple frustrating plays for him. I thought it was a good opportunity for him to learn from the sideline and watch,” Klieman said.

Charlie Brewer is set for his 25th consecutive start as Baylor’s quarterback, and 37th overall. The senior could also return next year since the NCAA has frozen eligibility, though Aranda said that hasn’t been discussed yet with Brewer.

“I know he loves ball," Aranda said. "It’ll be interesting to see where that falls.”

Sophomore quarterback Gerry Bohanon has attempted only one pass this season, but Aranda didn’t commit to any extended time for any QB other than Brewer.

“We’re going to give him that opportunity to finish out and close out these games that we’re either trying to close out or come back from,” Aranda said. “I think the more it’s in those types of situations, these nip-and-tuck games, the more that Charlie would start and finish it.”

Abram Smith had only two tackles in four games before the converted high school running back took over as a starting linebacker for Big 12 leading tackler Terrel Bernard, who suffered a season-ending shoulder injury in the Iowa State game. Smith had 13 tackles in his first start against Tech.

The Wildcats were 4-1 after their first five games, a stretch when they had a plus-eight turnover margin and outscored opponents 42-7 in points off turnovers. In their three-game skid, they are minus-seven and have been outscored 28-0 off turnovers.

Saturday marks the 124th anniversary of the first recorded game in Kansas State history. The school, then known as Kansas State Agricultural College, lost 14-0 at Fort Riley in that Thanksgiving Day game on Nov. 28, 1896.