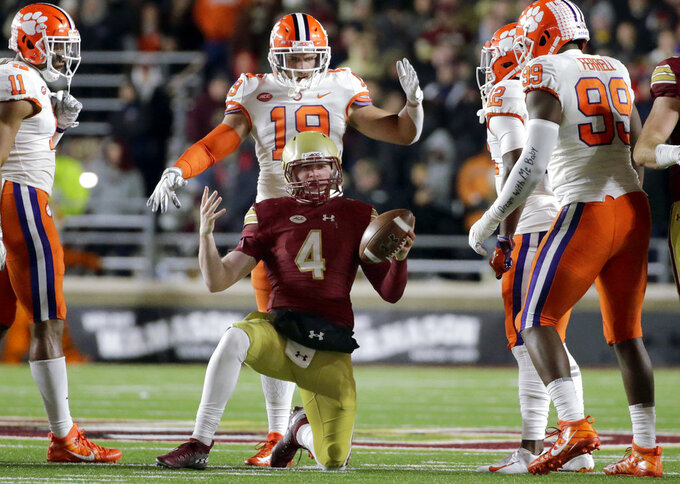 Boston College quarterback EJ Perry (4) rises from the turf after being tackled during the second half of the team's NCAA college football game against Clemson, Saturday, Nov. 10, 2018, in Boston. (AP Photo/Elise Amendola)

BOSTON (AP) — Boston College quarterback Anthony Brown was taken to a hospital with what his coach said were internal injuries after absorbing a crushing hit from 315-pound defensive lineman Christian Wilkins on the first series of the Eagles 27-7 loss to second-ranked Clemson on Saturday night.

Brown was brought down by Wilkins , who landed on top of him, after getting off an incomplete pass on third-and-9. When the rest of the Eagles went to the sideline for the punting team, Brown remained on the field.

He was taken to the locker room, and the school announced in the second quarter that he would not return. Coach Steve Addazio said after the game Brown was taken to a hospital but declined to elaborate on the injury out of concern for the player's privacy.

"Hopefully Anthony will be fine," Addazio said. "I just don't have any idea where we're at with that."

Second-string quarterback EJ Perry took began warming up on the sideline, but his entry was delayed when the Eagles returned Clemson's punt for a touchdown. He finished 12 for 21 for 98 yards in the game, with the Eagles' only score coming on a punt return.

"It definitely settled me down," Perry said. "It was good."

Brown also was injured in the Eagles' 10th game last year. That was a torn ACL that cost him the rest of the season.

A sophomore from nearby Andover, Perry did not take a snap last year but worked out with the first time for much of the spring and summer while Brown recovered from his knee injury.

"I'm excited for EJ," said defensive lineman Zach Allen, who gave the backup a pep talk before the second quarter. "I told him we have full faith in him. There were definitely some bright spots for him. He gives us a good chance to win."