BC turns to Grosel at QB for game against NC State 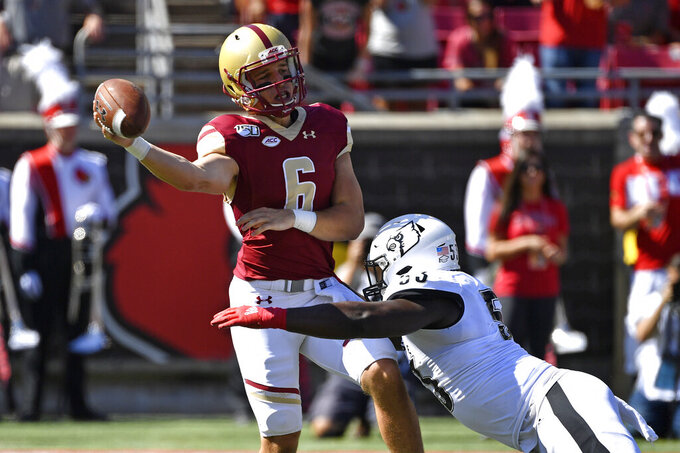 Boston College quarterback Dennis Grosel (6) attempts to get rid of the ball before being brought down by Louisville defensive lineman Amonte Caban (53) during the first half of an NCAA college football game in Louisville, Ky., Saturday, Oct. 5, 2019. (AP Photo/Timothy D. Easley)

BOSTON (AP) — Boston College is turning to sophomore Dennis Grosel at quarterback against North Carolina State to try to end a two-game losing streak and keep the Eagles' hopes of a bowl game alive.

Grosel came in during the second quarter of the Oct. 5 game against Louisville after Anthony Brown suffered a season-ending leg injury, and the former backup completed three touchdown passes in the 41-39 loss to the Cardinals. In the most extensive playing time of his career, Grosel was 9 for 24 for 111 yards; he also ran for 47 yards and was also picked off once.

"Dennis played a great second half of football and really did a great job," BC coach Steve Addazio said, noting that the Eagles scored 32 points with Grosel leading the offense.

"We're firing at a very high level offensively right now, and my expectation is we're going to maintain that," Addazio said. "I'm not trying to downplay the loss of your quarterback, OK. We all know how important the quarterback is to everything at every level of football for every team. But we have got a really good offense and we expect to go out and perform at a high level."

Brown had 1,250 passing yards, with nine touchdowns and two interceptions in six games this season, while also rushing for 126 yards and two TDs. In his career, he has thrown for 4,738 yards and 40 touchdowns, with 20 interceptions.

"He's the seventh all-time passing leader here in BC history, heading toward greater things this year," Addazio said. "He's prepared and practiced and put so much into it and we're so proud of him. It's a tough deal, but he's a tough guy and he'll bounce back and we're going to love him and support him and get him back to where he was."

"Like I told the team after the Florida State game: the only team I'm worried about on our schedule is us. I think that's true," N.C. State coach Dave Doeren said. "I think we can be in a one-possession game with every team we're playing, and win."

Here are some more things to look for in Chestnut Hill on Saturday:

It's the second time Brown has ended his season early due to injury. He was the starter in 2017 when he injured his knee and missed the last two regular-season games and the Eagles' bowl game.

Boston College averages a league-best 253.2 yards rushing behind AJ Dillon, the ACC's top rusher at 124.7 yards per game. N.C. State counters with the conference's best defense against the run, allowing 66.7 yards per game on the ground. "There's a lot of things in this football game where you have strength on strength," Doeren said. "It'll be a really good opportunity for us to challenge our guys."

It doesn't get any easier for BC.

The Eagles have just six chances to pick up the three wins they need for bowl eligibility, and a victory at home against N.C. State is probably necessary to get there. After the Wolfpack, the Eagles visit No. 3 Clemson. Syracuse (Nov. 2) has won three of its last four against BC and Florida State (Nov. 9) has beaten the Eagles eight of the last nine times they have met. BC visits No. 8 Notre Dame on Nov. 23 and Pitt on Nov. 30.

The Wolfpack are 4-0 at home, averaging nearly 450 total yards and allowing 283 yards per game. It's an entirely different story on the road — where in two losses, N.C. State is gaining nearly 100 fewer total yards (369.5) and giving up 407 yards per game. "We need to take what we've done at home and bottle it up and get it on the road with us, and play better on the road for four quarters," Doeren said. "That's our calling card with this game."