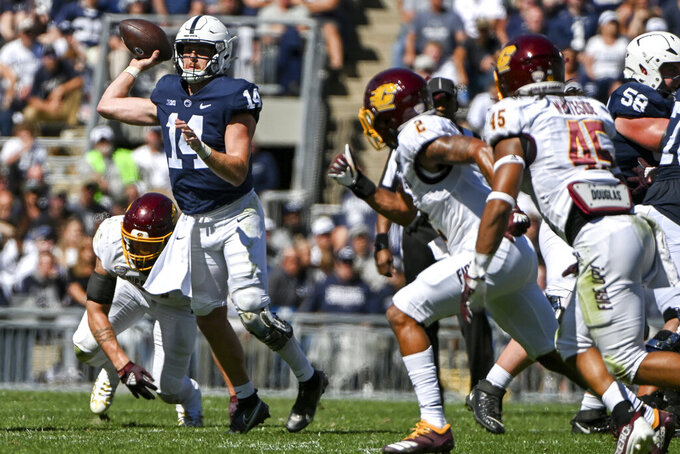 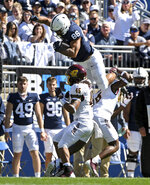 STATE COLLEGE, Pa. (AP) — James Franklin took a few moments to look over the stats after his team’s latest win.

“In terms of the critical areas, I wouldn’t say it felt like this, but we won all of them,” Franklin said.

Sean Clifford completed 22 of 34 passes for 217 yards and accounted for four touchdowns for the Nittany Lions, who forced four turnovers to keep the game out of reach.

The Chippewas were still able to drive the ball on the ground and in the air, racking up 363 yards. Mistakes kept them out of the end zone for much of the day, however.

Penn State players were hoping for something more demonstrative with Northwestern up next and a trip to No. 4 Michigan looming on Oct. 15.

Penn State’s offense did that.

Clifford marched Penn State down the field and hit Tinsley over the middle from 5 yards out to start the scoring. He got another shot on a short field when Zakee Wheatley picked off Daniel Richardson on Central Michigan’s eighth play of the day and returned it to the Chippewa 15.

Clifford needed just three plays from there to find Strange on a 4-yard quick out that made it 14-0.

The Chippewas (1-3) got their offense going in the second quarter. Richardson capped an 11-play drive by hitting Finn Hogan over the middle from two yards out to make it 14-7.

Central Michigan forced a turnover on downs moments later and Richardson found open receivers again. He ended a 9-play, 67-yard drive with a 14-yard touchdown pass to Joel Wilson that tied it at 14.

Scoreless possessions followed before the Nittany Lions retook the lead with a 14-yard touchdown run from Allen. Penn State led 21-14 at halftime.

The Chippewas turned the ball over again to start the second half.

They forced the Nittany Lions to punt on their first third-quarter possession but return man Jordyn Williams fumbled the ball to Penn State’s Curtis Jacobs inside the 10.

“I’m proud of the way our team fought,” Central Michigan coach Jim McElwain said. “I thought the guys never quit. That team on the other side knew what the Chippewas were all about toward the end of that game and that’s something that makes me proud.”

A 1-yard run from Clifford before a failed two-point conversion try early in the fourth made it 33-14.

Mustipher thanked punter Barney Amor for “being him” earlier this week.

Amor has emerged as one of the country’s best legs so far. He averaged 45 yards per punt against the Chippewas and pinned them inside their own 10 three times.

“I love what Barney does,” Jacobs said. “He’s a huge part of the team.”

Central Michigan: The Chippewas were able to move the ball, but mistakes stopped them in their tracks. In addition to the four turnovers, two first-quarter dropped passes forced them to punt while a bad offensive pass interference penalty in the third wiped out a chance to get in the end zone. A holding penalty in the fourth negated what would’ve been a 28-yard touchdown.

By Gary B. Graves 53 minutes ago
an hour ago
By The Associated Press 4 hrs ago
15 hrs ago
By Tom Withers 17 hrs ago