Continuity on offense boosts title hopes for No. 5 Georgia 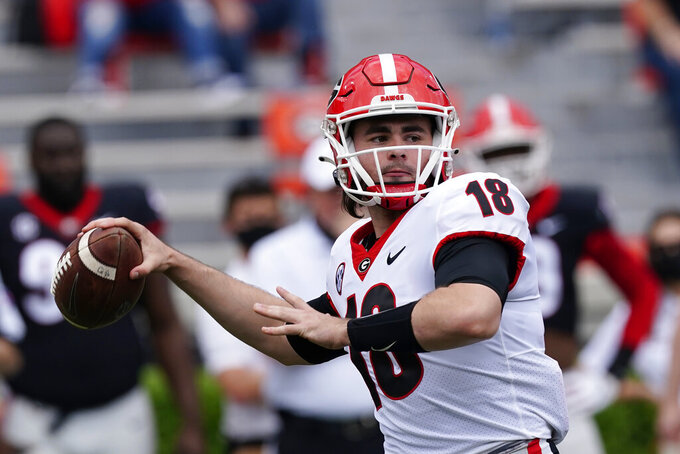 FILE - Georgia quarterback JT Daniels (18) throw a pass in the first half during Georgia's spring NCAA college football game in Athlens, Ga., in this Saturday, April 17, 2021, file photo. Monken believes his Georgia offense is “just so further ahead” than a year ago as it enters its first full season with JT Daniels at quarterback. The offense thrived in the Bulldogs' 4-0 finish after Daniels took over as the starter last season. Now, the continuity provided by Monken's second season as offensive coordinator and Daniels' return has fueled No. 5 Georgia's championship hopes for 2021. (AP Photo/John Bazemore, File)

Continuity on offense has given No. 5 Georgia momentum and reason to hope for big success in 2021.

Offensive coordinator Todd Monken believes his unit is “just so further ahead” than a year ago as it enters its first full season with JT Daniels at quarterback.

The offense thrived in the Bulldogs' 4-0 finish for an 8-2 final record after Daniels took over as the starter last season. Now, as Monken begins his second season directing the offense, Georgia is in the national spotlight as it prepares to open its season against No. 3 Clemson on Sept. 4 in Charlotte, North Carolina.

“I’m excited about the direction we’re headed and what we carried over from last year,” Monken said last week.

One year ago, Daniels was waiting for medical clearance in his recovery from a knee injury and Monken was still installing his offense after the coronavirus pandemic wiped out spring practice.

Now, the confidence that comes with familiarity has replaced uncertainty.

“I’d say the biggest difference would be we have that continuity,” said tight end John FitzPatrick.

Depth at running back and tight end, experience on the offensive line and an unusual combination of size and talent at wide receiver combine for a potentially dynamic attack. It all starts with Daniels, the Southern California transfer who sparked the offense after finally being named the starter last season.

“I am really pleased with where JT is with his leadership and commanding the offense,” coach Kirby Smart said Saturday.

“I’d say my biggest strength is understanding my role of being the primary distributor, like that is my job,” Daniels said. “... My strength and what I do is being able to read the defense and determine the best place for the ball to go that’s going to help us move the chains and score points.”

Center Warren Ericson has a cast on his right (snapping) hand and may open the season at guard, while FitzPatrick missed the first scrimmage with a foot sprain.

“I would have said this year if we were perfectly healthy that we would have been ahead offensively than we were defensively, but some of the injuries have forced some guys up,” Smart said.

Georgia must rebuild its secondary and replace outside linebacker Azeez Ojulari, who led the team with 8 1/2 sacks. Defensive tackle Jordan Davis will again lead the run defense. Adam Anderson could be the new pass-rush leader.

Arik Gilbert transferred from Louisiana State. The former tight end moved to wide receiver but his status is uncertain. Smart announced last week Gilbert was “dealing with some personal issues” and was away from the team. Smart said he hopes to have Gilbert back soon.

Former South Carolina coach Will Muschamp, who joined Smart's staff as a defensive analyst, has moved to an on-field role to coach special teams. Scott Cochran is away from the team for health reasons. Georgia announced Cochran "is taking time to prioritize his mental health and well-being.”

Smart said Muschamp played a lead role on special teams as South Carolina’s coach but will have help from other assistants, including tight ends coach Todd Hartley.

Though junior Zamir White is the returning starter at running back, there could be competition for the lead role. James Cook, Kendall Milton, Kenny McIntosh and Daijun Edwards provide depth. Cook is a big-play threat as a runner and receiving target out of the backfield.