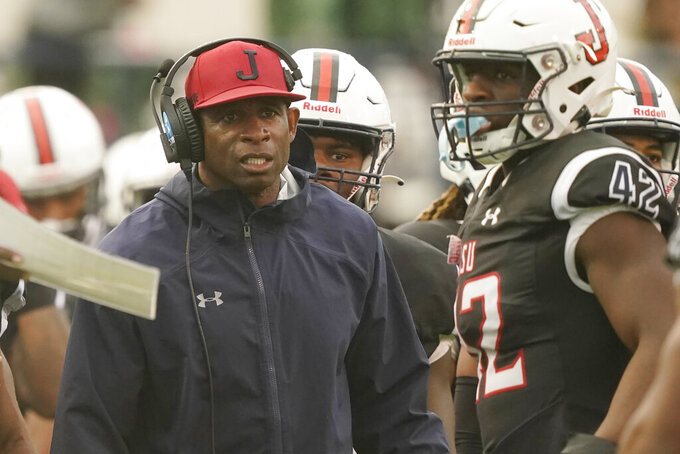 Jackson State head coach Deion Sanders glares at his players as they exit the field during the second half of an NCAA college football game against Southern University in Jackson, Miss., Saturday, Oct. 29, 2022. Jackson State won 35-0. (AP Photo/Rogelio V. Solis)

JACKSON, Miss. (AP) — Jackson State coach Deion Sanders has forbidden his players from leaving the team hotel while they're in Houston for Saturday’s game against Texas Southern after the rapper Takeoff was fatally shot in the city early Tuesday.

Houston police said the 28-year-old member of Grammy-nominated trio Migos was killed around 2:30 a.m. An argument had broken out among a group of 40 people who were leaving a party at a downtown bowling alley, police said.

In a YouTube video of a team meeting, Sanders told his unbeaten squad that family and friends must visit at JSU’s hotel this weekend. Going forward, the Hall of Fame cornerback added that means players can’t associate with some of the same friends and women they used to.

“You’re not whoever you were a year ago, you’re not even who you’re going to be a year from now, which is a blessing,” Sanders said. “But you can’t continuously do the things you’ve always done and expect to get the results. There’s gonna have to be a change.”

The coach acknowledged Takeoff’s death in a dice game and asked his team to pray for the families. Sanders added that he’s sick and tired of people “that are influential to you (that) are leaving us consistently. ... That eliminates all of y’all leaving that hotel because it ain’t happening until I give you further notice.”

Jackson State (8-0, 5-0 Southwestern Athletic Conference) leads the East Division and is ranked ninth in the Football Championship Subdivision. The Tigers have won eight in a row entering the game against Texas Southern (4-4, 3-2).