Differing paths of QBs Stroud, McCarthy led them to The Game 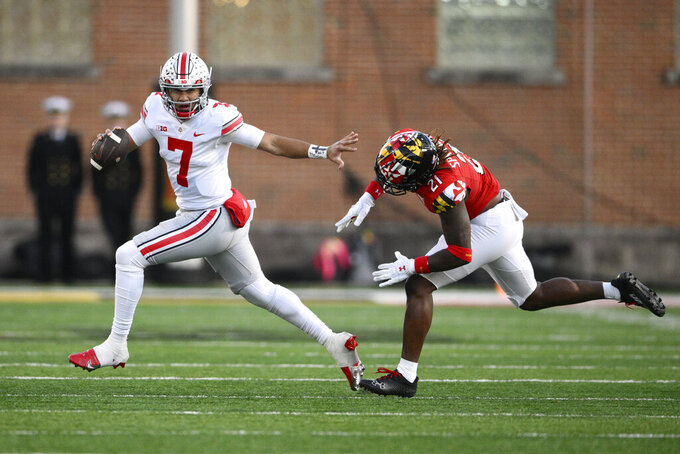 A year later, the 19-year-old from the Chicago suburbs is the starting quarterback for unbeaten Michigan, preparing to play in front of the largest and most hostile road crowd he's ever seen with the season on the line.

“It feels just like the stars are aligning,” McCarthy said. “And now it's finally here. It's meant to be."

Ohio State quarterback C.J. Stroud is as weathered as a two-year starter can be. A Heisman Trophy favorite and one of the most prolific passers in the country, Stroud remembers the agony of losing to the Wolverines a year ago despite throwing for nearly 400 yards and two touchdowns.

“We’ve been licking our wounds for 365 days," the 21-year-old Californian said.

Before last year, Ohio State had won eight straight in the series. Stroud, who is eligible for the NFL draft in the spring, wants to make sure back-to-back losses to Michigan aren't part of his legacy in Columbus.

Stroud has 35 TD passes this season, tying him with Houston's Clayton Tune for most in the nation. Moreover, he has emerged as a more mature and demonstrative leader. Stroud hasn't been as sharp in some games — notably when high winds all but grounded the Buckeyes' passing attack at Northwestern — but has done everything necessary to lead the Buckeyes to 11-0 and on the verge of the College Football Playoff.

“I think his leadership and his consistency has to be on display for 60 minutes for Ohio State to beat Michigan," said Kirk Herbstreit, the ESPN college football analyst and former Buckeyes quarterback. “There's going to be an ebb and flow to his game. How he maintains his poise, how he maintains his leadership and pushing his team to try to find a way to win, that's going to be the culmination of all that growth.”

"I think you can see his attitude on the sideline," Day said. “He is not concerned about statistics. I think he understands that they’re going to happen and they’re going to come, but he’s focused on one thing and that’s winning and being a leader for his teammates. And when you truly play like that and just have an open heart, I think it carries over to your team.”

In Ann Arbor, McCarthy beat out incumbent Cade McNamara early in the season. McCarthy is nowhere near the talented passer Stroud is, but his mobility allows him to — as coach Jim Harbaugh describes it — “turn water into wine.”

“He’s got that ability,” Harbaugh said. “I’m so glad that he’s on our team. He’s got that grit and determination, too, all in one package.”

McCarthy this season also had the luxury of playing alongside running back Blake Corum, who has rushed for 1,457 yards and 18 touchdowns while emerging as a Heisman Trophy candidate. Corum suffered a knee injury in last week's win over Illinois but said early this week that he expects to play Saturday.

If he can't, more of the load could settle on the shoulders of McCarthy, one of what Harbaugh likes to call his “happy warriors.”

“J.J. is very loose,” said center Olu Oluwatimi, a transfer who started for three years at Virginia. “I love that from a quarterback. Just being able to like, no matter what the outcome of the previous play is, focus on the next play. And do it while smiling, having fun. I love being in the huddle with J.J.”