Frost willing to 'make any sacrifices' to keep Nebraska job 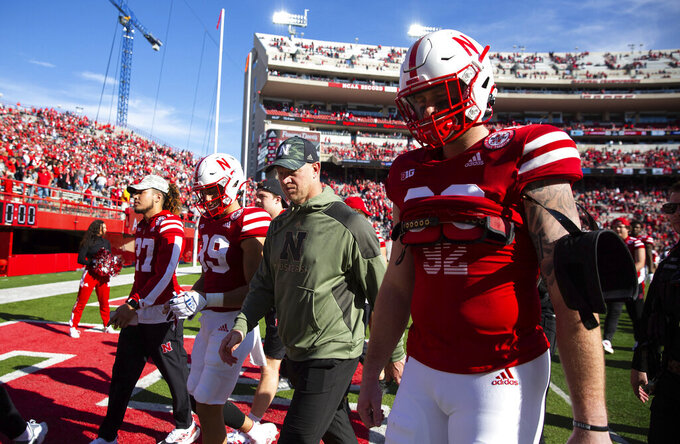 LINCOLN, Neb. (AP) — Scott Frost said Wednesday he had no problem taking a pay cut and firing four offensive assistants who also are friends if those moves give him more time to turn Nebraska into a winning program again.

Frost, 15-27 in four years and 3-7 this season, met with reporters for the first time since athletic director Trev Alberts announced the coach would return for a fifth season under a restructured contract.

“I took this job because I love Nebraska and I love this university," Frost said. "It would break my heart to think we made the improvements we have and gotten it so close in so many games and not get an opportunity to see it through. So it’s an easy decision to make any sacrifices I have to to have the privilege to continue to be here.”

Frost, who had been scheduled to make $5 million in 2022, will instead be paid $4 million. Frost said he was the one who suggested a pay cut. His buyout if he gets fired next year will go from $15 million to $7.5 million.

The offense has been inconsistent and quarterback Adrian Martinez has been mistake-prone in his fourth year as the starter. Special teams have been horrendous. Largely because of the defense, the Cornhuskers have not lost any game by more than nine points.

“We’ve come so close in so many games and it’s hard to think we can keep doing exactly the same things and get it over the top," Frost said. “It’s not any person’s fault, not any of those coaches’ fault. Sometimes there needs to be a little different voice and little changes that can make a difference.”

Frost said he was uncertain how he would structure his staff but he will attempt to become a CEO-type head coach rather than overseeing every aspect of the offense, as he had been doing along with Lubick.

“Frankly, I've been wearing myself a little thin trying to run the offense and call the offense, and it isn't just game day, it's all week long," he said.

Frost designed a spread offense that produced remarkable results at Central Florida, where he led the high-scoring 2017 team to a 13-0 record before he returned to his home state and the school he quarterbacked to a national title in 1997. His offense hasn't been nearly as effective against Big Ten defenses.

Tight ends coach Sean Beckton is the only remaining offensive assistant. The defensive staff remains intact. Frost said he hopes to hire new assistants as soon as possible after the season.

Frost said stepping back and turning over the offense to someone new will not be an easy adjustment for him. But he said it's necessary.

“There's things about being coach at Nebraska that I haven't been able to enjoy because of all the time I've been spending trying to fix problems and dig ourselves out of a hole and get the team better,” he said. "I've spent a lot of time offensively, too. Not that I didn't have the right guys. I can't say enough good about them. But I need to really trust somebody. I'll still be involved. That will take a lot off my plate and I think help me be better in some other areas."

Asked to elaborate on the things Nebraska coaches should enjoy, Frost said: “People know, and it's not intended at anyone that was here before (but) this was a big fix."

“When you're working that hard to get it fixed, I would love to be out talking to the fans more, I would love to do more booster functions, I'd love to go hunting more in western Nebraska,” Frost said. "Those things are important, I think, for my sanity so I get to spend time with people that matter in Nebraska. I love this state, I love representing the state, I want to spend more time doing some of those things. I think this will help me do that.”