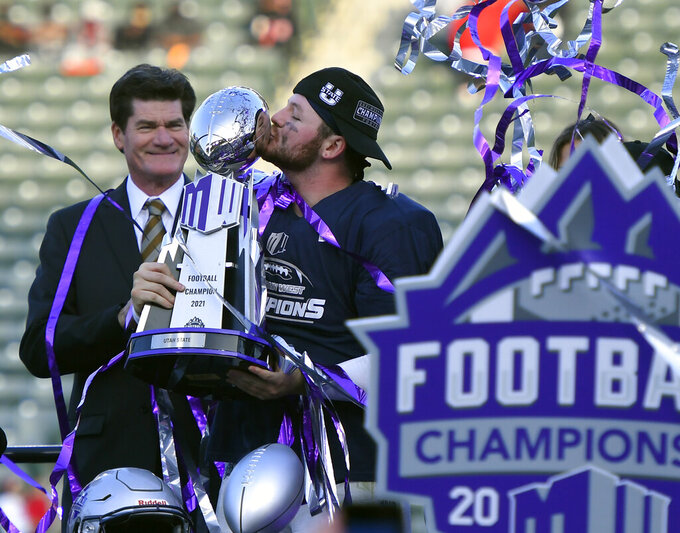 Line: Oregon State by 7 1/2, according to FanDuel SportsBook.

The Beavers will try to cap their first winning season since 2013 with a bowl victory, which would represent an exclamation point on the steady improvement the program has made in four years under coach Jonathan Smith. The Aggies return to Southern California two weeks after a dominant showing to capture the Mountain West title trying to tie the school record for wins in a season.

Utah State WR Deven Thompkins vs. Oregon State DB Rejzohn Wright. Thompkins ranks second in the FBS with a school-record 1,589 yards receiving. Despite his diminutive stature at 5-foot-8 and 155 pounds, Thompkins has a knack for attacking the ball in the air. Wright is tied for the team lead in interceptions (2) and pass breakups (8). Ahead of his decision whether to declare for the NFL draft, Wright should relish the chance to try and shut down an elite offensive weapon.

Utah State: QB Logan Bonner followed coach Blake Anderson out west after five seasons together at Arkansas State and threw for 3,560 yards and 36 touchdowns against 11 interceptions. The unexpected turnaround culminated with a 46-13 rout of San Diego State to win the conference championship game, with Bonner completing 29 of 42 passes for 318 yards and four touchdowns against one interception.

Oregon State: RB B.J. Baylor led the Pac-12 with 1,258 yards rushing. A first-team all-conference selection, Baylor’s ability to churn out yardage with a heavy workload was crucial in opening up play-action passes for QB Chance Nolan. Baylor is also effective at the goal line, with 10 of his 13 touchdown runs coming in goal-to-go situations.

Utah State is one of four teams in FBS history to win 10 games after recording a single victory the previous season, joining Stanford in 1940, Miami (Ohio) in 2010 and Fresno State in 2017. … Beavers LB Avery Roberts led the Pac-12 in tackles for the second straight season. He has 128 tackles this season after posting 69 during the abbreviated 2020 campaign. … The Aggies are facing a Power 5 opponent in a bowl game for the second time. They lost 24-9 to Baylor in the 1961 Gotham Bowl. … Oregon State is 2-0 playing in Los Angeles under Smith, who grew up in Pasadena. That includes a 45-27 win at USC this season, the Beavers’ first win there since 1960. … Utah State RB Calvin Tyler Jr. played at Oregon State for four seasons before transferring. Tyler leads the Aggies with 764 yards rushing and six touchdowns. … The Beavers allowed 10 sacks, the fewest in the Pac-12, and surrendered multiple sacks in only one game.