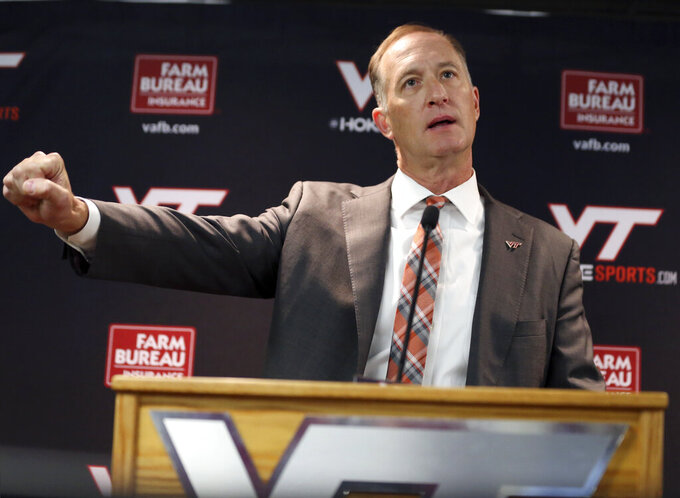 With an interim coach on one side and an embattled coach on the other, Virginia Tech visits Miami on Saturday in a matchup of teams that expected more this season. They have identical records; 5-5 overall, 3-3 in the Atlantic Coast Conference, not remotely close to the aspirational level for either program.

J.C. Price, who played for Virginia Tech and was an All-American there in 1995 — when the Hokies went 0-2, then beat Miami to start a run toward a 10-2 finish — will serve as interim coach after Justin Fuente was told he wouldn’t be back in 2022 and subsequently decided to not finish 2021.

“We think he's the right man for that position," athletic director Whit Babcock said. “This is his school."

Price still faces an uncertain future. So does Miami coach Manny Diaz, after one of the people who hired him, Blake James, was fired as athletic director Monday. Diaz is 19-15 in his three seasons and the volume of calls for his ouster keeps rising, especially after last week's last-second loss at rival Florida State.

The last six games, all of them ACC contests, have been like none other in Miami history: all decided by four points or less, and all with the Hurricanes allowing at least 30 points. The Hurricanes are 3-3 in those games, with a combined score of 200-200.

Diaz said he’s feeling pressure, but no more than usual.

“I’m almost done with six years at the University of Miami and I’ve never felt going into a game that it wasn’t a game that we didn’t have to win,” said Diaz, whose first three years were as defensive coordinator. “What’s required to go win a football game is what’s required. And that’s it. When you sign up and you wear The U, that’s what’s required."

Hurricanes WR Charleston Rambo has 954 receiving yards this season, putting the Oklahoma transfer on the brink of the fifth 1,000-yard season in Miami history. He’s also within 208 of matching Allen Hurns’ school record of 1,162 in 2013. Rambo also has 64 catches so far this year, eight shy of the school mark of 72 set by Leonard Hankerson in 2010.

There were seven point-scorers in last season’s Miami-Virginia Tech game, but most won’t figure into the stats Saturday. Jalen Holston had two rushing touchdowns for Virginia Tech in the Miami game last season. But he hasn’t had a touch in any of the Hokies’ last four contests, though has appeared in all 10 games this season. Other than Holston, everyone else who scored in last year’s game has transferred, graduated or gotten injured.

Miami leads the all-time series 23-15, but the last 21 meetings have been about as close as close gets. The Hurricanes are 11-10 since the start of the 2000 season against Virginia Tech. Combined score of those 21 games: Virginia Tech 526, Miami 522.