Jones out for the season as Terrapins try to regroup 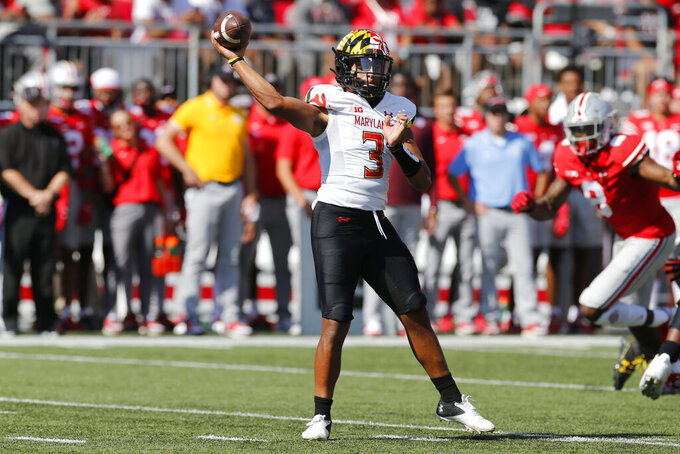 COLLEGE PARK, Md. (AP) — Maryland coach Michael Locksley said the goal for his team during the bye week was to get healthy — mentally and physically.

Receiver Jeshaun Jones and linebacker Durell Nchami are both expected to miss the rest of the season. Locksley said Tuesday that Jones had a lower-leg injury that requires surgery, and he said Nchami had upper-body surgery.

“We're a team that kind of limped into the bye week,” Locksley said.

The Terrapins won their first four games this season. Then their much-anticipated matchups with Iowa and Ohio State went about as badly as possible. Maryland lost standout receiver Dontay Demus to a season-ending injury in the Iowa game, and Jones went down against Ohio State.

The Terps also lost both games by a combined score of 117-31. Then the schedule mercifully gave them last weekend off.

“We lost to two of the top teams in our league, again not being with all of our players,” Locksley said. “It shows us we still have a ways to go against the elite programs, but I feel very confident that we'll get there because of the type of kids we have in our program.”

Maryland plays at Minnesota this week, and these next two games — against the Golden Gophers and Indiana — are crucial for the Terrapins if they're going to get back on track before another brutal stretch against Penn State, Michigan State and Michigan.

“A think a week off is something we all needed," quarterback Taulia Tagovailoa said.

The news on injuries wasn't all bad. Locksley did say he thinks linebacker Brandon Jennings will be back, and he is hopeful that defensive backs Jakorian Bennett and Kenny Bennett will return as well.

And although Demus and Jones have combined for 46 receptions and over 700 yards this season, the Terrapins have other capable pass catchers.

Rakim Jarrett has 22 receptions for 319 yards and five touchdowns. Tight end Chigoziem Okonkwo has three TD catches — as many as he had over his previous two seasons with the Terps.

Tagovailoa is averaging 314 yards passing per game, the Big Ten's second-best mark. The question is whether he can remain at that level after losing a couple important targets.

“You've never heard me be a guy up here that cries about losing players to injury,” Locksley said. “We've recruited a room of receivers that I think are really, really strong.”

Darryl Jones (14 catches for 134 yards this season) and Brian Cobbs (eight catches for 86 yards) are two players who may become more important for the Terps going forward. Each is in his fourth season playing for Maryland.

Facing Iowa and Ohio State was a sobering experience for the Terrapins, but they still have a chance to have a successful year relative to preseason expectations. This is a program that hasn't had a winning season since 2014, and the next couple weeks could go a long way toward determining how much progress Maryland ultimately makes in Locksley's third year at the helm.

“As I told our team, we sit here 4-2,” Locksley said. “If somebody told us at the beginning of the year that we had a chance to be 4-2 at the halfway point, I think every one of us would be pretty happy with it.”